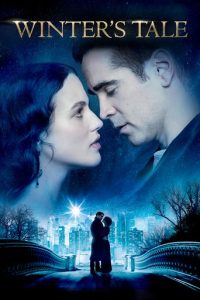 A burglar falls for an heiress as she dies in his arms. When he learns that he has the gift of reincarnation, he sets out to save her.

A burglar falls for an heiress as she dies in his arms. When he learns that he has the gift of reincarnation, he sets out to save her.

This Winter’s Tale is not the Shakespeare classic that you remember form literature class. The story takes place in New York. A burglar breaks into a West Side mansion and falls in love with a young girl that he finds there. This family movie review thinks that it may be too much for the younger ones due to thematic elements.

A burglar breaks into a wealthy New York West Side Mansion that he thinks is abandoned. When he arrives, he finds a beautiful young girl who is alone and dying in the big house. They fall in love. This part of the story takes place at the turn of the century. The burglar is an immortal with the power to make people reincarnate. She dies and the city grows up around them. You see New York grow into what it is today building by building. The man is walking in central park and runs into a little girl. It is his lover reincarnated. She grows and they resume their love affair.

This movie has a savory bedroom scene between the two lovers. It does not show much other than headshots, but the idea is there. It addresses the topics of life, death, and reincarnation. There is a scene where people are beaten. One person is pushed from a bridge and you can see the body falling from a distance. This is a love story and there is much tenderness, touching and kissing.

The story is based on a paranormal novel by Mark Herpin. It is very dreamlike and ethereal. Both of the protagonists in the film are strong characters and strong willed. The Irish burglar is able to stop time and bring back the dead. This fantasy is rated a PG-13 and this family movie guide thinks that this is appropriate for this move. The tale focuses on the emotional love between the two main characters. However, due to the thematic material, it might not be appropriate for children under the age of ten years old.