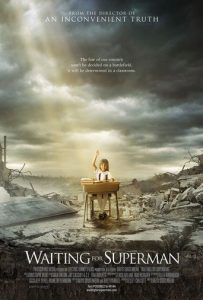 Gripping, heartbreaking, and ultimately hopeful, Waiting for Superman is an impassioned indictment of the American school system from An Inconvenient Truth director Davis Guggenheim.

Gripping, heartbreaking, and ultimately hopeful, Waiting for Superman is an impassioned indictment of the American school system from An Inconvenient Truth director Davis Guggenheim.

This movie is a documentary. It is a political statement that supports the maker’s views on the American educational system. It has some important social value and attacks the problems with the educational system. It follows the lives of several kids through their educational experience. It is more like a case study than a movie. It makes its point using facts and figures, attempting to convince the audience to support the cause. If your kids like sitting in a lecture hall, it would be for them.

The MPAA rated the move as a PG for themes, mild language, and smoking. Ok, technically yes, this is the case, but this movie was not targeted towards children. This was one for Mom and Dad. It would be OK for small children to watch, but keep in mind that it is a documentary and strives to make its case through a very academic presentation of facts and figures. I have no strong opinions about children of any age seeing this movie. It would be OK for children, but every parent will have to decide for themselves whether they want to go with their children to see it. I would not say that there is anything wrong with it, just that parents need to be forewarned that this is a documentary on the intellectual side.