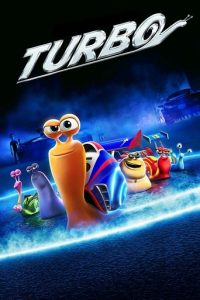 The tale of an ordinary garden snail who dreams of winning the Indy 500.

The tale of an ordinary garden snail who dreams of winning the Indy 500.

Turbo is a 3D computer-animated sports comedy by 20th Century Fox. It tells the tale of an otherwise normal garden snail who has a dream to become the fastest snail in the world. This is a cute idea and a great movie for the family. It has some positive messages and this guide to kids movies thinks that it will be an excellent choice for the whole family, with only one exceptionäó_ the soundtrack.

Turbo the snail dreams of being fast, just like his hero five time Indianapolis 500 race hero, Guy Gagne. This snail has a need for speed, making him an outsider among the other snails in the community. The snail community is a slow and cautious bunch, not much for excitement and thrills. Turbo is an embarrassment to his family, who just wish that he would give up his fascination with the fast life.

One day, Turbo accidentally gets sucked into the turtocharger of a drag racer. His DNA becomes fused with nitrous oxide and he suddenly finds himself with superpowers that snails do not normally have. He can now go incredibly fast. He has eyes that light up light like headlights and a shell that blinks red like taillights. He has other car-like features too. He sometimes makes sounds like a car and can play music from a radio. So what will Turbo do with his superpowers?

Turbo and his friend Chet are captured and brought to a snail race by a person driving a taco stand truck. He now has a chance to race against other snails. He eventually gets to race in the Indy 500. This is a story about not letting one’s limitations get in the way of their dreams. This movie is imaginative and fun.

The only questionable feature about this film is its soundtrack. It features Snoop Dogg, Run=DNC, and Snoop Dogg and Pharrel Williams doing “Drop It Like It’s Hot.” It has Pitbull doing “Krazy” and House of Pain with their classic rap tune “Jump Around.” Kids really like the song by House of Pain, but all parents need to make it a point to listen to the lyrics carefully, or read them online. I was surprised when I finally realized what the song was about. It has a catchy beat that makes kids attracted to it, but you may not necessarily want them singing along.

The lyrics of some of the songs on the soundtrack would be more appropriate for a mid to late teen audience, but the rest of the movie is geared towards younger children. This movie is terribly cute and an interesting concept. It has lots of Indy Cars and racing action. The movie has a positive message about chasing your dreams and dreaming big. Everyone has differing views on what is appropriate and what is not for their family.

If you decide that the soundtrack is too inappropriate then you can always choose to watch family movies online such as The Incredibles or Cinderella for a more wholesome family experience.