Skip to toolbar
Home » Movie » Transformers: Dark of the Moon

Transformers: Dark of the Moon 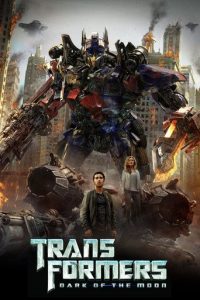 Sam Witwicky takes his first tenuous steps into adulthood while remaining a reluctant human ally of Autobot-leader Optimus Prime. The film centers around the space race between the USSR and the USA, suggesting there was a hidden Transformers role in it all that remains one of the planet's most dangerous secrets.

Sam Witwicky takes his first tenuous steps into adulthood while remaining a reluctant human ally of Autobot-leader Optimus Prime. The film centers around the space race between the USSR and the USA, suggesting there was a hidden Transformers role in it all that remains one of the planet's most dangerous secrets.

The nextTransformer movie directed by Michael Bay is planned to hit theaters June 29th, 2011. In this new movie, Transformers: The Dark of the Moon, the Autobots and Deceptions get involved in a space race between the U.S.A. and Russia. The human, Sam Witwicky, helps his robot friends. You will see that some old characters are back and some new ones, too… like the villian in the form of Shockwave, a Transformer character, who rules Cybertron. The Autobots (Bumblebee, Ratchet, Ironhide and Sideswipe) are led by Optimus Prime who are determined to avenge their defeat from the Transformers: Revenge of the Fallen in 2009.

This long-lasting television and film series was based off the popular Transformer toys. Prior to 1984 Hasbro secured the rights to the changing robot toys in Japan, partnering with the Japanese toy manufacturer Takara. Thus creating the umbrella name the Transformers with a successful alliance that has lasted for more than 20 years.The Transformers toy line was launched is 1984. This toy line was promoted by both an animated television series and a comic book by Marvel Comics.

Based off the popular television and film series there were various video games released including: Transformers: Revenge of the Fallen in 2009, Transformers: Animated in 2008, and Transformers: The Game in 2007.

Transformers is back in Imax 3D and even greater special effects than before. In this movie the Autobots learn about a hidden Cybertronian spacecraft that has crashed on the moon. They must race against the Decepticons to reach it and learn about its many secrets. This movie is filled with intense action and special effects. The battle sequences are well done for a Sci Fi movie, and there is the usual havoc and destruction everywhere. Drama in the movie is dark and serious. This family movie review considers it too intense for the very young, but those who are in the early school age years would probably find it to be enjoyable.

One theme that this parental guide the movies feels parents should know about is the theme involving the space race between the U.S. and Russia. This movie rewrites history and gives the reason for the 1969 space race between the U.S. and Russia finding an alien craft that had crash landed there. A new villain is on this scene by the name of Shockwave, who rules Cybertron. The Decepticons and Autobots battle it out till the end on earth. The intense battle scenes might be too much for very young ones. They show scary robots that are larger than life destroying human life and civilization. This one could be a source of nightmares in the very young. There is a scene that shows a terrified girl about to be destroyed. There are many guns and bullets throughout the movie.

Another scene that needs mentioning that might trigger bad memories in some children and adults is a tall high-rise building that comes down in a fireball with papers flying everywhere in people hanging on for their lives as the building topples. This scene might be too traumatic for some. This family movie review just wanted to warn you about the violent imagery throughout this movie. This soundtrack is tense and dark too, adding to the tension.

If you have seen the other Transformers movies, you know what to expect from this one too. This one is a little darker, a little more violent and a little more intense than the previous Transformers movies. For if this reason, this family were movie review has to recommend that this movie is for school-aged children or older. This is definitely not one for the younger ones who might find it too much to handle. The MPAA has rated this movie as a PG-13 and you can expect this to be similar to the Transformer movies in 2009 and 2007, which were rated also PG 13. Also, parents, you probably will not be surprised at the marketing and action figures that will be a result of this movie. I bet Drag Strip’s wings really hurt when you step on them in the hallway at night in bare feet!