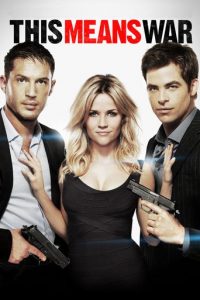 Two top CIA operatives wage an epic battle against one another after they discover they are dating the same woman.

Two top CIA operatives wage an epic battle against one another after they discover they are dating the same woman.

Top CIA agents find themselves in a battle against their greatest foe. They find that they are dating the same woman and it is a fight to the end for the ultimate prize. When two men want the same woman, there is only one thing to say, This Means War. The plot is simple but the action is complex. This family guide to the movies has an interesting take on this one and thinks that it deserves special attention. This movie was rated an R for sexual content. The filmmakers filed an appeal with the MPAA and the rating was updated to a PG-13. This is confusing for any parent who wonders if this is really a family movie, or if the MPAA was wrong to change the rating.

When it’s spy against spy, one would expect that this movie has its share of action, explosions, car wrecks, gunfire, and beautiful women. This Means War movie has just what you would expect from this type of action flick. As these two rivals try to be the other’s undoing, the action takes on a comedic air, making light of tranquilizer guns in the neck, getting shot in the leg, and other mishaps. When one spy is the source of their other’s pain, the attacking spy usually has a good laugh. This family movie review thinks that this is a consideration that parents need to know in order to judge for yourself whether you will support this movie.

This Means War movie is an interesting twist on the usual spy movie and the usual switch date movie. The movie continually makes light of violence. It attempts to do it in a tongue in cheek manner, but sometimes it does not come off that way. The movie was downgraded to a PG-13 for sexual content, and sexual references. Actually, it is filled with sexual references from beginning to end. They are suggested, rather than blatant. It was also rated a PG-13 for violence, action and language. So the question is what caused it to receive an R rating in the first place?

Apparently, there were a few sexual contents that were considered too explicit for children from Chelsea Handler. It seems that with just a few editing tricks these were quickly removed. But the question is whether this fixes it and makes it a good family friendly movie. The answer is, probably not. Here is why. Everyone still knows what she meant. The meaning is still there and the innuendo is still there. The audience still gets the message, only the words have changed. In the final analysis, this move did not remove the reasons for the This Means War movie receiving an R rating in the first place. It was a good try, but this family movie review thinks that it was not enough to make me want to take my kids below 13.