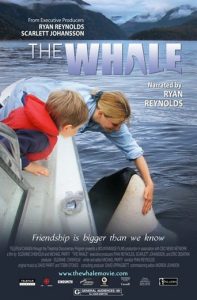 THE WHALE tells the true story of a young, wild killer whale - an orca - nicknamed Luna, who lost contact with his family on the coast of British Columbia and turned up alone in a narrow stretch of sea between mountains, a place called Nootka Sound.

THE WHALE tells the true story of a young, wild killer whale - an orca - nicknamed Luna, who lost contact with his family on the coast of British Columbia and turned up alone in a narrow stretch of sea between mountains, a place called Nootka Sound.

The Whale is a true story that tells the tale of a young killer whale named Luna. The young orca is separated from his family (pod) on the coast of British Columbia. He is found alone at Nootka Sound. Orca’s have strong social ties and when they are separated they can die from anxiety. They often just fade away, but this didn’t happen to Luna. This Parental Guide to the movies gives this heartwarming story two thumbs up for any member of the family.

The Whale is about an orca who tried to reach out to people when his whale family was gone. Most of the people were happy to treat him like part of the family, but some were not. The beginning of the movie gives important information about orca’s and their social orders. The scenery and cinematography is beautiful and worth the ticket.

The film is documentary style, but it is not boring. This family movie review considers the movie to be engaging, particularly for the personal dialogue and scenery. This is a great film for the whole family and you learn about whales through the personal experiences of those who are closest to Luna. It asks many hard questions about whether we do more harm than good when we interact with wild animals. People and Luna pitted two sides of humans against each other. There are absolutely no inappropriate actions or language in the movie.

Soon Luna became a worldwide sensation and everyone tried to help Luna find his family. The government of the United States funded efforts to reunite Luna with his family. The whale became a hot political issue. This is a heartwarming story. It is a great food for conversation about which side was right and why. It is a wonderful opportunity to ask many questions and open discussions about environmental issues with your children.

Eventually, Luna started to damage boats. Now Luna was in trouble and people wanted to shoot Luna, or have the authorities even charge him with attempted murder. The story has many twists and turns. This family movie review has to recommend this as a “must see” for the entire family. The best part of this movie is about the lessons that Luna teaches the humans about how to love and how to get along with each other. Luna and his human friends formed special friendships and the humans had more to learn than about themselves and their relationships with the world around them.

Were Luna’s friends right to break the law to be with Luna, or was the law right to keep people from Luna? This movie forces the audience to take sides. This movie will spark family conversations about right and wrong that can be teachable moments that will last a lifetime. I will absolutely not give away the end, but it will make an impact that will stay with you and your family for a long time, maybe even a lifetime. This parental guide to the movies considers this movie, The Whale, an absolutely necessity to see for everyone.