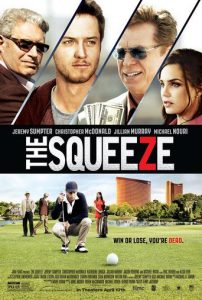 A humble young man with uncommon skills from a small southern town gets caught up in high stakes golf matches between big-time gamblers until the game becomes life and death.

A humble young man with uncommon skills from a small southern town gets caught up in high stakes golf matches between big-time gamblers until the game becomes life and death.

Golf is usually not considered a deadly game, unless you happen to get caught up in a game with the Mob. Augie Baccus is a young man who wins at every game that he plays. He was a star quarterback, a points leader in basketball, and a track star. It is not surprising that he is a golfer extraordinaire too. All is well in Augieäó»s life as he prepares to try to qualify for the PGA tour, until one day a southern gentleman approaches him with a lucrative offer. The Squeeze is a tale of high stakes double jeopardy, but is it a good movie for the family? This parental guide to the movies will tell you the tale.

The plot revolves around the gambling tycoon, Riverboat, and Augie. Riverboat asks Augie to play for him in some high stakes gambling matches in Las Vegas. Augie agrees and he does not lose a match. His winning streak enrages a local Mob boss, Jimmy Diamonds. Diamonds goes to Augieäó»s hotel room and tells him to lose a match, or Augie will find himself at the bottom of a pool with lead shoes. Next, Riverboat informs him that he had better win or he will kill him. Augie is in a tough situation, win or lose.

This is not a good made for the entire family movie. First, it is about gambling, murder plots, and contains some sexuality involving call girls in Las Vegas. The characters are rough and do not speak to each other in the softest terms. There is also some thematic material involving drugs. These are not the makings of an excellent kidäó»s movie.

The movie is set in the 1950s. There is a scene where some people break into the house and violently tries to throw them out. This sets the stage for Augieäó»s fall from grace. His girlfriend sees this as a bad choice and threatens to leave if he goes. The movie centers on the moral choice that Augie must make. Should he stay home and live an honest, hard, and poor life, or does he go to the big city for the sake of money? The Mob characters are violent and threatening. This is a tension-filled movie. It is not the worst Mob movie for children, but it is not the best either. This family movie review does not recommend this one for those 13 and under.