Skip to toolbar
Home » Movie » The Chronicles of Narnia: The Voyage of the Dawn Treader

The Chronicles of Narnia: The Voyage of the Dawn Treader 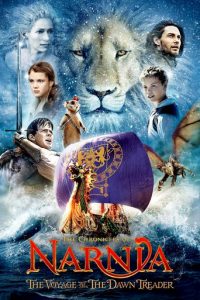 The Chronicles of Narnia: The Voyage of the Dawn Treader (2010)

This time around Edmund and Lucy Pevensie, along with their pesky cousin Eustace Scrubb find themselves swallowed into a painting and on to a fantastic Narnian ship headed for the very edges of the world.

This time around Edmund and Lucy Pevensie, along with their pesky cousin Eustace Scrubb find themselves swallowed into a painting and on to a fantastic Narnian ship headed for the very edges of the world.

Welcome to Narnia and the fantasy world of C.S. Lewis. This 1950s fantasy series was first released in 2005, with the second set released in 2008. The first film was The Lion, the Witch, and the Wardrobe. The second was the Chronicles of Narnia, Prince Caspian. We have had both of these classics in our house for quite some time. My kids were around 7 and 8 when we got them as a Christmas Present. They have magic, talking animals and a world of magic and fantasy. These two movies are a build up for the release of the third movie in the series, The Chronicles of Narnia, The Voyage of the Dawn Treader. Scheduled to be released in theaters December 10, 2010, it is certain to spark sales of the older movies as parents and children collect the entire set. In case you did not catch the series the first time around, here is a recap of the first two family movies.

The Lion, the Witch, and the Wardrobe is the story of four British Children who are removed to the country for their safety during World War II. In this big country estate, they find a wardrobe (closet) that leads to the fantasy world of Narnia. They enter into the world of Narnia, where animals speak and magic rules. They must ally with the Lion, Asian, to help win the battle against the White Witch, who holds Narnia in a spell of eternal winter.

The second kids film, Chronicles of Narnia, Prince Caspian, was released several years after the first in the Narnia series. This move picks up where the others left off. This time, the same four children are summoned back into Narnia. Only this time they must help Prince Caspian, the rightful heir to the throne of Narnia, reclaim his rightful place. His evil uncle, King Miraz, has seized the throne of Narnia and has a plan to eliminate all Narnians forever. Prince Caspian and the four children must stop him before it is too late.

The Chronicles of Narnia, The Voyage of the Dawn Treader is the third film in the series, to be released in December 2010 is a continuation of the other two books, but the plot stands alone and it is not necessary to see the other two to understand this one. The first book is a great introduction to the Narnia series, but the other books are simply other adventures along the same line, with the same characters. This time, the children enter Narnia with their cousin Eustace. They enter on board a ship called the Dawn Treader. When they arrive in Narnia, they find that it is now ruled by Caspian X. In this film, only Edmund and Lucy return, the excuse being that Peter and Susan do not need to return because they have learned all that they need to in Narnia. There are appearances by the White Witch and Trumpkin the dwarf from the first movie.

In terms of appropriate material, these movies have some redeeming educational value. The works of C.S. Lewis are considered classic literature and the stories are delightful. The fantasy world of Narnia challenges the imagination. However, parents please note there are violent battle scenes that even though they are fantasy, could be frightening for younger children. It has lots of sword fights and battle sequences, people getting thrown through the air, and other elements of a medieval battle. It might be too frightening for small children below the age of 7 or 8. This review for parents applies to all of the family movies in the Narnia series. If you have children that are at an age to enjoy this type of movie, then by all means enjoy it with them; just exercise caution with the wee little ones.