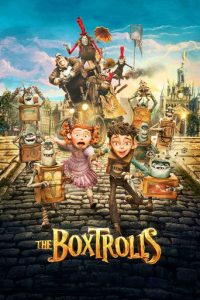 An orphaned boy raised by underground creatures called Boxtrolls comes up from the sewers and out of his box to save his family and the town from the evil exterminator, Archibald Snatcher.

An orphaned boy raised by underground creatures called Boxtrolls comes up from the sewers and out of his box to save his family and the town from the evil exterminator, Archibald Snatcher.

If your children have read the story, Here Be Monsters, then they are already familiar with this movie. The Boxtrolls was based on this classic children’s book. This parental guide to the movies thinks this one may be an animated weekend smash hit. The plot revolves around Eggs, an orphan raised by underground trash collectors, as he tries to save his friends from the evil exterminators. For a kid’s movie, so far this seems original, yet somewhat normal. This movie is anything but normal. It is quirky and twisted. If one did not know better, they would mistake it as a Tim Burton creation, but it looks like Burton now has competition in the strange and bizarre category. Enter the world of the boy named Eggs.

So what is a boxtroll exactly? A boxtroll is a troll that lives under the streets and wear boxes. They come out at night and roam the streets for garbage that they can recycle into something useful. They are quite the ecofriendly and practical creatures. However, not everyone sees them that way. The city sees them as a menace and has hired a team called the Red Hats to exterminate them. The team is led by a tyrant who is out to make a name for himself by ridding the town of these vermin so that he can climb the rungs of society and become a white hat, the upper class.

The white hats spend more time eating cheese and stuffing themselves than doing any actual work for society. This movie makes a political statement about green issues and pork belly politics. The boxtrolls are uncomfortable with human interaction and they should be because humans see them as nothing more than monsters, but they are anything but monsters. They are cute, similar to minions, only they all have their own little personality that makes them even more adorable. The boxtrolls must find their courage and overcome their fears. Eggs must learn the manners of polite society.

The MPAA rated this one PG for action, peril, and rude humor. It would not be a movie geared towards first through fourth graders without those elements. It is a dreadfully cute movie that makes a political statement. This movie is one great family movie for the whole family and one that is definitely thinking outside of the box.

The Book of Life