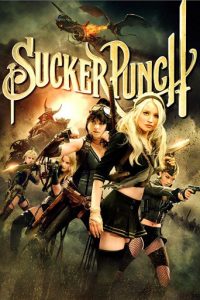 A young girl is institutionalized by her abusive stepfather. Retreating to an alternative reality as a coping strategy, she envisions a plan which will help her escape from the mental facility.

A young girl is institutionalized by her abusive stepfather. Retreating to an alternative reality as a coping strategy, she envisions a plan which will help her escape from the mental facility.

Baby Dolläó»s nightmare is only beginning when her wicked stepfather has her committed to an asylum. In five dayäó»s time, she will undergo a lobotomy. She must escape, but the odds are against her and the day grows closer. Unable to face her reality, she retreats into a fantasy world of her own imagination. She and four other inmates must battle a number of creatures and enemies in order to escape. The lines between reality and fiction are blurred as this fivesome fights for their lives. This is an adventure quest where the five must retrieve 5 items that they will need to break free before it is too late. Sounds innocent, so far, right?

Babydolläó»s fantasy is a dark and intense one, but her reality is even darker. The movie was rated a PG-13 for sexuality, combat scenes and violence. Language was also part of the official rating criteria for this movie. Early in the movie, a young teen is sexually assaulted by her foster father. There is not nudity shown, but the scene is very frightening and suggestive and they did not leave out the violence. There is blood and bullets everywhere, the official ratings downplayed the blood, violence and gore in the movie. Several small human-like creatures are burned, shot, hit and cut. Drinking, smoking and use of pharmaceutical drugs for pleasure is depicted.

At this point, I think you get the idea, this is not a movie for young children. The images are drawn cartoon graphics. Red colors, flashing lights, and dark images give the movie a frightening feel. The intense music adds to the mood. I believe that this movie, even the trailers, will give adults nightmares. The scenes from World War II are iconic and reminiscent of real-world images from that era. The drawn portions of the movie are lifelike enough, they did not need anything else to make them more realistic. The young teenage heroine is blond, young, and sexy. The movie is largely a war zone.

Fantasy gamers and World of Warcraft fans will most likely find this one to be a good action flick. This family movie review cannot emphasize enough that this movie has lots and lots of shooting. It has blimps bursting into flames, bullets, bullets, and more bullets. The body and violence count go on and on. The young teenage heroines are extremely scantily clad throughout the movie. The soundtrack features Led Zeppelin and a hard, driving beat. This is not a movie for the weak at heart or the young. If your teen is a gamer, they may have already seen it, if not, use caution on this one.

This family guide to the movies cannot even consider this a PG-13. I would rate it an R based on barely clothed teenage girls and the nonstop violence and gore. The characters are teenagers, but that is the only teenage thing about this movie. The themes, clothing style, body count, violence and dark mood and imagery are that of an adult R movie. The fact that the characters are young teenagers pushes it over the edge even farther. This parental guide to the movies thinks that they really skirted the line on this oneäó_and it was a short skirt at that. Donäó»t say you were not warned on this one. Can you say “content advisory”?