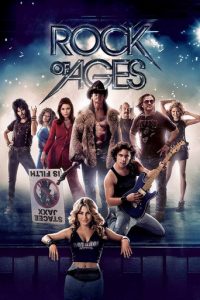 A small town girl and a city boy meet on the Sunset Strip, while pursuing their Hollywood dreams.

A small town girl and a city boy meet on the Sunset Strip, while pursuing their Hollywood dreams.

Rock of Ages is based on the Broadway musical of the same name. This story examines the trials and tribulations of life on stage. Set in 1987, Sherrie and Drew are two young people who are chasing their wildest dreams in Los Angeles. They are a love at first sight story, but they will face many challenges in their whirlwind romance. This adult movie is about sex, drugs, drinking, and Rock and Roll, and this parental guide to the movies does not think that it is good family fun. The Rock of Ages is an adult movie.

Rock of Ages features a great soundtrack that pays tribute to all of the greats of the 1980s. The soundtrack features Styx, Journey, Pat Benatar, Bon Jovi, Twisted Sister, Poison, and Steve Perry to name a few. The story begins in a Hollywood bar/club called the Bourbon Room. Here Drew, working as a busboy and hoping to make it big, meets Sherrie. Their dreams face challenges when the Cityäó»s Mayor decides to clean up the Sunset Strip and abandon the seedy lifestyle of the area. This Rock of Ages plot is set to a power-house soundtrack. Sherrie gets fired from the strip club and Drew comforts her.

Sherri then goes to work for a äóìgentlemanäó»s clubäó nearby. Like many who come to LA to chase their dreams, Sherrie ends up working as a stripper. The only redeeming point is that Sherrie is ashamed of her job when she meets Drew on the street. The Rock of Ages movie has excessive drunkenness, a plot that involves a stripper at a gentlemanäó»s club, lap dances, violence, and lots of sexual references. Do I need to go on, or does this sound closer to an R yet?

It is hard to see where this movie is going with all of the sex, drugs and rock and roll. However, the ending is surprising. In a Leave It to Beaver ending, Drew and Sherrie realize the intensity of their love for each other. Sherrie quits the club and they all go off to raise a family and settle down. This seems an unlikely end to the movie, but nonetheless, they did it. This ending has a tendency to leave one dazed, confused and surprised.

If you like 80s rock and enjoy scantily clad women strippers in clubs, this Rock of Ages movie is for you. There are plenty of bedroom scenes, as one could expect from this type of movie. This family movie guide does not think that it is a good movie for the entire family. Calling this one a PG-13 is quite a stretch. This one got by on a technicality. The content is there, but they apparently did not cross the line as far as nudity is concerned to make it an R. However, this parental guide to the movies thinks that it is close. Perhaps Brave or Madagascar 3 would be a better choice for a family movie.