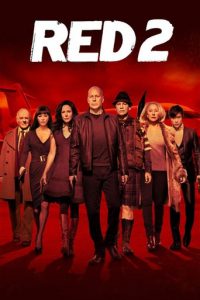 Bruce Willis, John Malkoich, and Mary-Louise Parker are back for another worldwide hunt for a missing portable nuclear device. Red 2 is an action packed adventure and it stars Bruce Willis, so it may not be the best family friendly movie choice. This one was rated PG-13 by the MPAA, but this kids movie review thinks that it might be a little too much for younger ones. Here is why.

First, the plot can be summarized in only a few short sentences. A retired CIA agent must reunite his elite team to track down some bad guys who have control of a portable nuclear device. Alright, so maybe it can be summarized in one sentence. This means that the rest is filled with other stuff. Whatever could this other “stuff” be? Let us once again remember that it is a Bruce Willis being the good guy film.

This movie has sexual references throughout. It is mostly suggestive language and body language. One of the characters uses kisses to interrogate her subjects. There is one obscured posterior view in one scene, but no real nudity. There are many brutal ways to die in this movie. You also might just learn a few new tricks to do with common office supplies. There are many brutal fights, beatings, car bombings, guns, knives, grenades, and did I forget to mention a nuclear explosion. Yes, this is a high body count and high bullet count movie. There are abundant swear words. There are also drugs and one person in an asylum for the criminally insane. There is one reference to the government doing experiments with street drugs.

Don’t think the fun is over, that was just the short list. There many long, lengthy car chases with more crashes and near misses than one dare count. There are lots of explosions, and many sad scenes. This movie is nonstop action. There are many jokes and humorous moments in the movie that revolve around someone being hurt or killed. For those that like the heavy hitting Bruce Willis film, this one looks very good, but it might be a good idea to leave those who are under thirteen at home. This parental guide to the movies thinks that this one might be too much for some adults too.