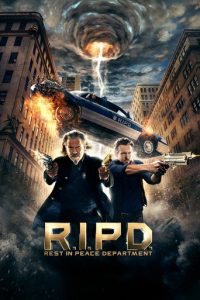 A recently slain cop joins a team of undead police officers working for the Rest in Peace Department and tries to find the man who murdered him. Based on the comic by Peter M. Lenkov.

A recently slain cop joins a team of undead police officers working for the Rest in Peace Department and tries to find the man who murdered him. Based on the comic by Peter M. Lenkov.

When Nick Walker is slain on his job as a cop, he soon discovers that there is another department just waiting to gain his services. The R.I.P.D. is there to protect and serveäó_the living. As soon as Nick is dead, he enters a world between the living and dead. It seems that there is a group of dead police officers whose duty it is to keep the dead criminals in check. They must walk among the living in search of criminals who wish to take over the world of the living. If the criminals succeed, the world of the living will vanish. This move may not be a kids movie, as it deals with the harsh realities of life and death, but only you can decide.

The opening few scenes of the movie set the stage for the plot. Officer Nick Walker is in hot pursuit of a criminal. The movie opens with a car chase full of explosions, gunshots, and fast action. The criminal turns and shoots Officer Walker multiple times with an automatic weapon. You see the gun shooting, the officer’s body flies backwards, and fall to lie flat on the floor dead. It is a very graphic opening scene. There is no blood or gore, but the violence is still very clear.

The officer is dead and opens his eyes to a strange new world where bodies and police cruisers are floating in the air in suspended animation. He is sucked through a tunnel in the sky and lands in a chair in front of a desk. Behind the desk is a woman with a badge. The woman informs him that he is dead. She asks him to join the R.I.P.D. (Rest In Peace Department) and issues him a gun. His new job is to catch the bad guys who escaped judgment. He and his new partner, Roy Pulsipher, a Wild West Sheriff, embark on their new journey to fight the crime in the world of the dead.

The undead criminals are sometimes grotesque and always scary. There is some sensuality and some sexual references throughout. The action is violent and constant. The two cops get new bodies. Nick is an old Chinese gentleman and the Wild West Sheriff becomes a sexy tall blonde in skintight clothes. This is the source of the sexual content. There are many disturbing scenes throughout the movie. There is a scene where someone (already dead) jumps out a high-rise window. You see the body falling to the street below.

In the end, the two dead officers must face their foes in an Old West style showdown. There is mayhem and destruction everywhere as the battle for the world of the living is underway. The dead officers sometimes do things that would kill the living, but they only get hurt. For instance, one officer tells the other officer not to tense up and then throws him in front of a bus. They fall from buildings and crash land on the sidewalk, unhurt for the most part.

This movie deals issues of life after death, and it contains its fair share of violence. The scary undead criminals and violence may make it a little too scary for the young ones. The sexual content is mild, but still present. This movie may be appropriate for those well into their preteen years and above, but not much younger than that. Of course, it is up to every parent to make their own decision, but this one may be too violent and disturbing for many.