Skip to toolbar
Home » Movie » Now You See Me

Now You See Me 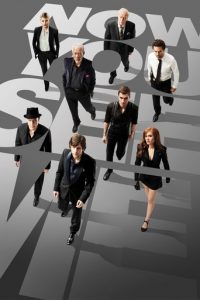 An FBI agent and an Interpol detective track a team of illusionists who pull off bank heists during their performances and reward their audiences with the money.

An FBI agent and an Interpol detective track a team of illusionists who pull off bank heists during their performances and reward their audiences with the money.

Now You See Me takes the audience into a world of mystery and illusion. Daniel Atlas, Merritt McKinney, Jack Wilder, and Henley Reeves are magicians who meet a strange man wearing a hoodie. They then begin receiving tarot card invitations with the symbol of an eye on them. At the instruction of the cards, they eventually all meet at a shabby apartment. When these four magicians meet, their personalities do not necessarily match. This brilliantly crafted plot keeps the audience guessing throughout, but you may be asking if this is a movie for kids to see with you.

The magicians discover blueprints for some machines that have the potential to take their act to the next level. As part of the act, the magicians ask the audience to name a bank that they should rob. They then use their teleportation machine to rob the bank by teleporting inside the bank safe. In the finale, the money showers down on a surprised audience. From that point on, the movie turns into an FBI thriller as detectives try to catch the foursome, now calling themselves the Four Horsemen.

This original plot has many twists and turns, as well as some material that may not be well suited to children. A woman is seen in a bra and there are several adult jokes, including some that might even make the adults blush. Aside from bedroom antics, the movie has many scenes of violence, including a man who is eaten by a tank of piranhas. There is lots of gunfire, chase scenes of various types. The movie has its share of intense action and obscenities.

Several scenes of the magician’s acts are frightening, such as a man is lowered into the Hudson River who dies as his family watches. One scene shows a dead body with a toe tag. Aside from this, there are many references to the occult including a scene that suggests the “tunnel of light” as a symbol that someone has died. One man holds up a voodoo doll and curses another man. The movie abounds with references to the supernatural.

Now You See Me is an excellent action packed thriller. These magicians began with a modern Robin Hood theme where the magicians intended to give money to people they feel have been done wrong by the bank. However, whether this justifies their actions is up to you to decide. Even without the intense plot, there are plenty of other reasons why this Parental Guide to the movies would not recommend this movie for kids under the age of 13.