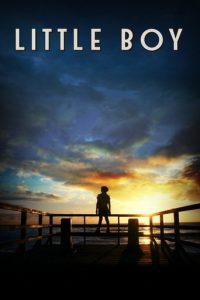 An eight-year-old boy is willing to do whatever it takes to end World War II so he can bring his father home. The story reveals the indescribable love a father has for his little boy and the love a son has for his father.

An eight-year-old boy is willing to do whatever it takes to end World War II so he can bring his father home. The story reveals the indescribable love a father has for his little boy and the love a son has for his father.

Little Boy is the gripping story of war told through the eyes of an 8-year-old boy. In this story, Pepper Flynt Busbee has an ideal life. He and his father, James, play and have wild adventures together. They play cowboys and Indians, go on swashbuckling adventures, and enjoy every day together. All is well in the Busbee home until one day his father announces that he must go away to fight in World War II. This family movie review thinks this one is an original and heartwarming tale.

The theme of story centers on faith. Pepper’s father always taught him that he can achieve anything that he can believe. After a tearful goodbye, Pepper and his mother go back to life, but Pepper misses his Dad so much that he cannot bear it. One day, a magician comes to school and uses Pepper on stage to have him try to move a bottle across the table with his mind alone. Pepper did it. From then on, he began exploring just what his mind was capable of doing. He decided to move a mountain and bring his father back. This is a story about love that knows no bounds.

This is a generally kid friendly movie, but it does have some disturbing scenes of World War II combat. There is not blood and gore, only gunfire and a sense of danger. There is some pushing, shoving, and bullying by his brother. The powers that Pepper develops as a part of his faith may frighten some children. He develops the power to control physical objects with his mind. This is not used in a frightening way. He only wants to bring his father home safe from the war.

This is a powerful story of faith and love. It is told through the delightful narrative voice of Pepper as an older man. The interaction between Pepper and his father is inspirational, an excellent role model of a father who is truly engaged with his son. Pepper has a disability and does not grow as big as other children do. This story sends the message that his father loves and accepts him just the way he is. This theme of acceptance and family love is an amazing journey of love and faith. This parental guide to the movies thinks that other than the World War II scenes, this one is appropriate for children ages 6 and up with the caution that it contains some powerful and intense scenes.