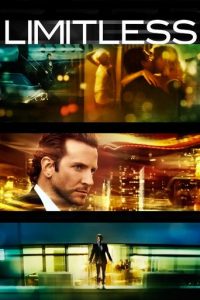 A paranoia-fueled action thriller about an unsuccessful writer whose life is transformed by a top-secret "smart drug" that allows him to use 100% of his brain and become a perfect version of himself. His enhanced abilities soon attract shadowy forces that threaten his new life in this darkly comic and provocative film.

A paranoia-fueled action thriller about an unsuccessful writer whose life is transformed by a top-secret "smart drug" that allows him to use 100% of his brain and become a perfect version of himself. His enhanced abilities soon attract shadowy forces that threaten his new life in this darkly comic and provocative film.

Limitless tells the story of the perfect pill. Eddie Morra, played by Bradley Cooper, is given a top-secret drug that allows the person to evolve into a perfect version of themselves. The drug allows the person to use 100% of his mind, instead of the 20% of the average person. The drug gives him superhuman mental capabilities. With the use of this drug, Eddie is always one step ahead of the game. However, this drug and his new found powers have a dark side. He soon finds himself a target for assassination.

This movie is about a loser turned superhero. Eddie has access to everything he has ever read or heard. This allows Eddie to rise to the top of the financial world. The corrupt Carl Von Loon (Robert Deniro) sees his powers and decides to use Eddie to make billions for himself. Not only do the people surrounding Eddie have alternative plans and a dark side, so does the magic drug. The rise to the top is fast, but the fall is hard. He eventually begins to lose his wealth as hit men attempt to end his future altogether. The hit men only want the drug, at any cost. He has to take the MDT in order to beat the hit men, even though the drug will eventually be his downfall. Eddie walks a fine line between invincibility and the end of his life.

The MPAA rates this movie PG-13 for drugs, violence, sexuality and language. This family movie review has to disagree. It is much closer on the scale to an R than a PG-13. The entire plot revolves around a drug. Even though the drug is fictional, it resembles many other street drugs that are real. Eddie becomes an addict and all of his dreams are fulfilled. What message does that send? In the end the drug is his downfall, but this message was only a small portion of the plot. A majority of the movie is spent with the main character making lots of money and living the high life by taking the drug.

The violence portrayed in this movie is graphic sexuality and adult language is rampant throughout the movie. It is too bad that the MPAA does not have a rating for PG-15 or 16, because 13 year olds might be a bit too young for the portrayal of sexuality and drug theme that is pervasive throughout the movie. Younger teens might not understand the plot enough to take away the rapid rise and downfall theme. It is difficult to say what message they would take away from the movie. Hopefully, it would not be that drugs could make you invincible or make all of your dreams come true, as they did for the main character in the film. This family movie guide has to caution parents about this one. This is definitely not one for those below the age of 13 and questionable for those in their mid-teens. Those that are vulnerable or sensitive might get the wrong message from this one.