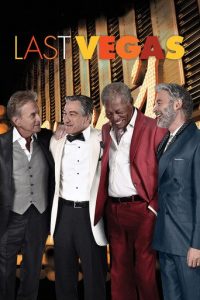 Three sixty-something friends take a break from their day-to-day lives to throw a bachelor party in Las Vegas for their last remaining single pal.

Three sixty-something friends take a break from their day-to-day lives to throw a bachelor party in Las Vegas for their last remaining single pal.

What happens in Vegas, stays in Vegas, right? That may be true, but not when they put it on the big screen for everyone to see. This kids movie review thinks that this adult movie may not be the best choice for family fun and adventure. In Last Vegas, a group of party ready grown men who are just about to celebrate the loss of freedom of the last man standing are turned loose. It seems that the last remaining single man in the group is about to tie the knot and this group vows to take him out in style.

The group of men are all in their sixties. The lives and shenanigans of sixty-year-old men might not be the most interesting for the younger members of the family. You might not want them to know exactly what Grandpa does on holiday. The three gentlemen are played by actors with whom the parents and grandparents will be familiar. The story features Michael Douglas, Robert De Niro, Morgan Freeman, and Kevin Kline. In the movie, these three have been friends since childhood. The last bachelor of the group, Billy (played by Michael Douglas), is going to marry his 32 year old girlfriend. The four gentlemen head for Las Vegas to have the bachelor party of the century. Their plan is to not act their age and enjoy some of the gentlemanly delights that Sin City has to offer.

The movie was rated PG-13 by the MPAA, but how bad is it? This question can be answered by another question, how bad can four sixty-year-old men be turned loose with no wives around in Vegas. Sexual content is abundant, as you could well imagine with older men and younger women. There are many scantily clad women with shapely legs throughout. One cannot help but notice because the director made certain that the camera operator did not miss even one of them. The camera angles in this move provide more sexual content than that plot or the dialogue.

Beautiful women and older men out for the party of their lifeäó_might not be the best place to start for a family movie. One scene shows the backs of hundreds of young, buxom women in thongs at a beach. The men get drunk and hung over one last time. The theme song continues to refrain, “bring out the bottles” throughout the movie. Sex, alcohol, and rock and roll are the main elements of the movie. Not to mention, all of the men are married and all of them tend to forget this fact throughout the movie as they attempt to recapture their youth.

The content and plot of this movie do not cross the definition of an R by MPAA standards and guidelines, but as one can see, this is not a kids movie or a movie for families. It is for men having a mid or late life crisis. These four gentlemen had the time of their lives and whooped it up one last time, but you have to consider what seeing this movie would do to your child’s perception of Grandma and Grandpa. It might not convey the image that you wish them to know about just yet. This is a cute movie, but it might not be the best kid’s movie.