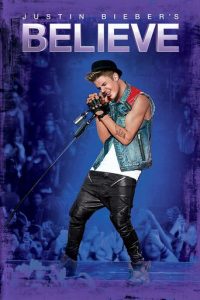 A backstage and on-stage look at Justin Bieber during his rise to super stardom.

A backstage and on-stage look at Justin Bieber during his rise to super stardom.

Yes, parents, it is true, Justin Bieber has made another movie and it is being released Christmas Day. Justin Bieber’s Believe is a 3-D concert film that will have your children out of their seats and in the aisles dancing. This sequel to Never Say Never features interviews with Justin’s mother, his mentor, Usher, and manager Scooter Braun. It gives you more than music, it is an inside look at this teen heartthrob. This Parental Guide thinks that this movie is a made for families movie. This is especially true if you are a teenager.

The move takes an inside look at Bieber’s life and most of the characters are playing themselves. For Bieber fans, it will be a must-see film that is OK for parents to sit through too. It does have a few words that may be offensive to some and Bieber does go through puberty in this coming of age look at this teen idol.

Bieber talks about the positive and the negative parts of stardom. He talks about the effects of growing up with the whole world watching. Everyone is waiting for him to crash, but Bieber is determined to be the exception rather than the rule. This story is inspiring and focuses on the theme of believing in yourself and to keep trying, even when everyone else says that it cannot be done. This movie shows the rise from being a hit on Youtube to superstardom. It focuses on the struggle to stay on top.

A few tickets to this movie may make the perfect stocking stuffer for your teen, but it is up to you to decide if it is appropriate for the younger ones. Everyone has differences in opinion about what is appropriate for their family. This one will be sure to be a hit with the Justin Bieber fan in the family. Of course, this stocking will also include the cd, so be prepared. This is an inspiring movie about in inspirational young man, although like many teens these days, his mother still wishes that he would pull his pants up. As we have heard them say many times before, “Whatever!”