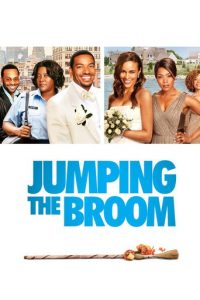 Two very different families converge on Martha's Vineyard one weekend for a wedding.

Two very different families converge on Martha's Vineyard one weekend for a wedding.

Jumping the Broom is about two very different families who converge on Marthaäó»s Vineyard for a series of marital mishaps. At first, this parental guide to the movies thought that it sounded a lot like the Brady Bunch, and in the end, this comedy turned out to be right. The two families turned out to be more different than was expected. The key conflict in this movie centers around the fact that the couple getting married is bi-racial. The bride is mixed white/black and the groom is black. The cultural conflicts between the relatives make for a movie filled with both comedic interludes and drama throughout the movie.

In terms of being a family movie, parents will really have to decide for themselves on this one. You must know that the couple first meets and falls in love while she (Sabrina) poses for a portrait for the artist, Jason and soon to be groom. The only problem in terms of family friendliness is that what she is wearing, or rather what she is not wearing. She is posing in a very little bit of lingerie. In order to be rated an R, it has to go farther than this movieäó_technically. This scene, combined with several sexually related comments push the limits of the ratings category. The content of this scene and the comments were a very adult subject. The language was soft, but the meaning was still there. If it were not for this content in the beginning of the movie, this family movie review would have rated it closer to a PG-13.

Racial thematic elements in the movie might cause another concern for parents. The couple does not have any racial issues and are accepting of each other. However, the extended family on both sides is a different story. The Watsons, family of the bride, are upper class bi-racial. There are many issues over whether to call the bride white or black. The Taylors, family of the groom, have down home Southern black charm. One can easily imagine the tensions that build when these two families are brought together for a wedding. The conflict is immediate upon first sight as both mother-in-laws start the sniping match based on race. The theme of the story centers on how these two families eventually gain acceptance of each other, despite the racial conflict throughout the movie. It is a movie about accepting each other for who we are on the inside, despite any differences on the outside. From this standpoint, it has a valuable lesson about looking beyond differences in how we look and putting racial differences aside.

Jumping the Broom has wonderful thematic elements about acceptance and understanding. There are lots of family arguments, including one that escalates to the groom slugging someone outright. This is truly a mixed movie. In some cases, it shows adults serving as poor role models, but in the end, the overall theme of the movie is learning to work out our differences and accept each other for who we are on the inside. The semi-nudity and sexual references in the beginning of the movie were a key reason why this family movie review ranked it closer to an R than a PG-13.

Pirates of the Caribbean: On Stranger Tides