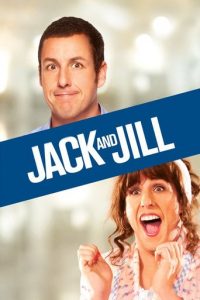 Jack Sadelstein, a successful advertising executive in Los Angeles with a beautiful wife and kids, dreads one event each year: the Thanksgiving visit of his twin sister Jill. Jill's neediness and passive-aggressiveness is maddening to Jack, turning his normally tranquil life upside down.

Jack Sadelstein, a successful advertising executive in Los Angeles with a beautiful wife and kids, dreads one event each year: the Thanksgiving visit of his twin sister Jill. Jill's neediness and passive-aggressiveness is maddening to Jack, turning his normally tranquil life upside down.

You know how it goes. Jack and Jill went up the hill to fetch a pail of water. No, wait, this is the wrong movie. This version of Jack and Jill is not the same one that you know from childhood, but then again, what do you expect from Adam Sandler? In this version of Jack and Jill Adam Sandler does double time, playing both Jack and Jill, two twins that share a special bond unlike any other. When Jill comes to stay for the holidays, tension and plain old sibling rivalry begins to build. Even though they are adults, the old sibling rivalry is alive and well.

In this hysterical comedy the insults fly and the comedy is nonstop. Jack thinks that he is off the hook and will only have to endure for a few days. His sister has different ideas and decides to stay through the holidays. It is not exactly a family reunion made in heaven. Jill has a bucket list of things that she wants to do in Los Angeles. She intends to fulfill every one of them, much to the chagrin of Jack. While the family tries to smooth things out between the two of them, the comedic incidents are back to back.

This movie is rated PG for crude jokes, some mild sexual humor, and brief smoking. Sexual humor is hidden in such a way that kids probably would not get it. It is in the form of double meanings that would have a different, yet still funny meaning for kids. One example is the phrase, äóìHe just wants to play Twister with your Sister.äó The kids will probably miss the hidden meaning. Comedic violence is also seen throughout the movie, such as when the son smacks Jill to see if it hurt Jack too. There is also a scene where Jill crashes a jet ski in the pool. Jill is decidedly passive aggressive and very co-dependent and needy. This family movie guide considers it a PG, but not for those under age 5.

The action in the movie heats up when Al Pacino (playing himself) sends Jill a hotdog with his number written in ketchup. It seems that they are old high school buddies and he wants to see her again. Parental Guide to the movies could not resist and decided to solve your curiosity. The number on the hotdog only gives a very fast busy signal, and no, it is not really Al Pacinoäó»s number. It does not seem to come up on reverse phone directories either. We knew that you would be too curious to resist, so we saved you the trouble. Go see the movie with your kids and have a blast!

To view our reviews for movies in-theater now just click on the Parental Guide movie guide or browse current movies by using the previous and next buttons located above the MPAA Rating Information section.