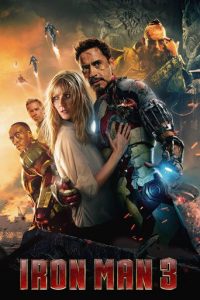 When Tony Stark's world is torn apart by a formidable terrorist called the Mandarin, he starts an odyssey of rebuilding and retribution.

When Tony Stark's world is torn apart by a formidable terrorist called the Mandarin, he starts an odyssey of rebuilding and retribution.

Iron Man is back on the screen with Robert Downey Jr. playing Tony Stark. Stark’s world is threatened when a terrorist called Mandarin begins a campaign of rebuilding his empire and seeking retribution. Iron Man 3 is an excellent story, especially for die-hard Marvel fans. However, in the tradition of Marvel, this on-screen comic is not for the faint of heart, or the young. As far as a kids movie goes, Parental Guide to the movies has a word of caution for you before you load the whole family in the car.

This movie picks up after Iron Man 2. Stark is changed by the aftermath of Loki’s attack on New York City. He can’t sleep and is under stress. He spends his sleepless nights working on new versions of the Iron Man suit. He has a life, a girlfriend and other than his alter ego as a mad scientist dreaming and scheming up new inventions and improvements to the suit, has a rather peaceful and normal life. This all changes when Mandarin embarks on a quest looking for him. When Mandarin attacks Tony’s mansion and destroys it, he is left with nothing but an old broken down version of the suit. He must fix the suit and confront Mandarin in this old and outdated version of Iron Man.

This movie is filled with action and violence. It is a dark movie. Aside from that, there are several other reasons why parents may not want their children to see this movie. To start out, this movie contains considerable explicitly suggestive material. Suggestively clothed women are abundant throughout the movie. Several scenes contain implied sexual activity and dialogue. Even though it does not show bodies, it makes the meaning clear. Older children will definitely get it. One character asks another to take a shower with them. There are scenes involving ladies of the night in a traditional harem-like setting. This is just the tip of the iceberg in terms of adult content.

Of course, this movie has its fill of violence and gore. People are blown up, shot, get in fights and there are some scenes involving suicide. This material may be inappropriate for individuals who are sensitive to this type of material. The movie seldom shows real blood, but it is implied. One character has his arm chopped off. Again, they do not show blood on the screen, but it is implied. One character gets his neck snapped in a gruesome manner. There are too many scenes of violence to count in this movie.

Marvel is known for dark, violent movies that are meant to appeal to the early teen to young adult fans. It is not meant for those under the age of 12. The bottom limit for suitability is probably more about 10, certainly not anyone younger than that. It might be noted that a few of what were considered the worst of the scenes were cut out of the DVD. For example, the shower invitation was cut out. Even with the worst cut out, the DVD still is not that much better in terms of being a movie for kids, at least the younger ones.