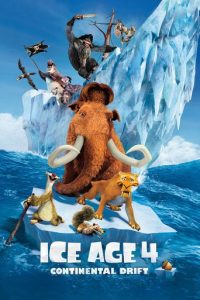 Manny, Diego, and Sid embark upon another adventure after their continent is set adrift. Using an iceberg as a ship, they encounter sea creatures and battle pirates as they explore a new world.

Manny, Diego, and Sid embark upon another adventure after their continent is set adrift. Using an iceberg as a ship, they encounter sea creatures and battle pirates as they explore a new world.

First the ice age, then the meltdown, now continental driftäó_ whatäó»s a wooly mammoth, sloth, and saber toothed tiger to do? Yes, once again environmental havoc has set Manny, Diego, and Sid on another chilly adventure. This time they battle pirates and various sea creatures as they explore a new world while floating adrift on an ice berg. This Ice Age: Continental Drift humorous adventure is sure to cause a meltdown of the summer heat and this family movie review thinks that it will be just the cure.

Cute, cute, and cute are the only words to describe this sequel. It is similar to the first two movies in terms of family friendliness. Ice Age: Continental Drift does contain some mild rude humor and violence similar to the first two movies. This was the reason for the PG rating. However, for the most part, it is a movie for any age. Diegoäó»s teeth do jump out at you at times, so the very youngest might find it too frightening. The old favorites are all here, with the addition of a few new friends and creatures along the way, but Parental Guide to the movies is not going to tell you any more about them. You will just have to go to a theater near you and meet them for yourselves.

Ice Age: Continental Drift movie is full of lifelong friendships, acceptance, and the importance of families. It does have intense scenes of sadness, such as when all of the characters are torn from their families. There are many times when the characters must overcome their fears. This is a highly emotionally charged film. The first Ice Age emphasized hope, but this family movie review has to consider this sequel to be a bit darker. Ice Age: Continental Drift focuses on the topics of extinction, death, and disease more than the other two movies. This was a normal course for the plot and there was really nowhere else to go. All of the species represented in the movie really did die, so it would be hard to explain how they survived into the movie. This could have been handled by avoiding the topic, but the writers decided to go there, so it made the movie a little darker. However, they would distract the audience from darkness with fun and jokes.

The Ice Age: Continental Drift movie is full of questions for the curious. Manny is finally reunited with his family, but once again, mother nature has other plans and he is once again torn from them. Will he ever find them again? Did Diego finally find true love of the sabre toothed kind? Will the squirrel ever get his acorn? These burning questions permeate the plot of this fun loving movie for the entire family. This icy movie is a great way to beat the summer heat that will be sure to keep every member of the family laughing. Be forewarned: there is a mad sloth song and dance that will probably haunt you for daysäó_äóyou got to move it move itäó_you got to move it move itäó_äó Donäó»t say that Parental Guide to the movies did not warn you.