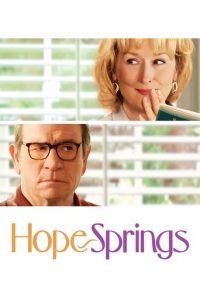 After thirty years of marriage, a middle-aged couple attends an intense, week-long counseling session to work on their relationship.

After thirty years of marriage, a middle-aged couple attends an intense, week-long counseling session to work on their relationship.

Hope Springs is an adult movie geared towards a middle-aged audience. The Hope Springs movie centers around a middle-aged couple who go on an intense week-long counseling session to try to repair their relationship. This parental guide to the movies expects it to be good, as one would expect from past performances by Meryl Streep. However, whether it is suitable for the entire family is the question.

The Hope Springs movie is rated a PG-13, which means that the MPAA did not feel that it crossed the line in terms of material that was inappropriate for young teens and preteens. However, Hope Springs is about a couples therapy session and sexual themes are part of this discussion, quite a bit as a matter of fact. Although there are no explicit scenes in the film, the content is there and it is not hidden. Hope Springs is a mature movie for mature audiences. It is closer to an R for thematic material, rather than actual acts.

Although, this material was considered to be appropriate for young teen audiences, it is unlikely that they would want to see a drama about characters their parentäó»s age. Hope Springs is an adult drama about adult problems to which children and teens cannot relate, and could not be expected to until they are much olderäó_much, much older in their eyes. Their characters in this movie have grown children of their own.

In building their relationship, the couple must explore new topics in sexuality. One of Meryl Streepäó»s lines is, äóìI am not here for sex tips.äó The couples discuss sexual fantasies and explore new things in that topic area. A central thematic element in the movie centers on sexual topics. No, nothing is shown, other than a couple in bed, but about 90% percent of the conversation focuses on bedroom antics. This family movie review thinks that this is a chic flick, a middle-aged adult chic flick. Our advice on this one is to find a babysitter and have a romantic night out alone. Neither is this movie appropriate nor interesting for a younger audience. Hope Springs movie is for the grown-ups in the family, at least according to this parental guide to the movies.