Amazon.com
$11.99
See it
Price history
×
Last Amazon price update was: March 20, 2020 12:25 am
× Product prices and availability are accurate as of the date/time indicated and are subject to change. Any price and availability information displayed on Amazon.com (Amazon.in, Amazon.co.uk, Amazon.de, etc) at the time of purchase will apply to the purchase of this product.
Share
Tweet
Pin
0 Shares 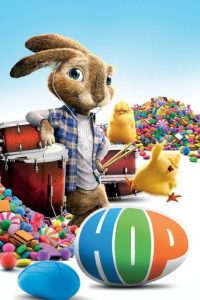 E.B., the Easter Bunny's teenage son, heads to Hollywood, determined to become a drummer in a rock 'n' roll band. In LA, he's taken in by Fred after the out-of-work slacker hits E.B. with his car.

E.B., the Easter Bunny's teenage son, heads to Hollywood, determined to become a drummer in a rock 'n' roll band. In LA, he's taken in by Fred after the out-of-work slacker hits E.B. with his car.

Hopping down the bunny trail just in time for Easter, this adorable tale will make children and adults of all ages smile. A teenage bunny is just about to inherit the title of Easter Bunny, but like every teenager, he has different plans for his future. He wants to travel the world and play in a rock band! One night, as he contemplates his future, he is struck by a car. While injured, he takes up residence with the man who hit him.

Don’t worry everything will be OK in time to make his rounds on Easter. The scene was not that traumatic and he is really only mildly injured. Little ones should not be disturbed at all by the accident scene! The Easter Bunny makes an obnoxious house guest and creates many predicaments for his caregiver. The Easter Bunny is very cute, but not the best house guest in the world. He is a bit of a Prima Donna too, but that’s OK, he’s the Easter Bunny.

The Easter Bunny does play a mean set of drums and he poops jelly beans normal flavored ones. That was the type of rude humor that caused it be rated as a PG instead of a G. This movie has everything an Easter movie could want. It has lots of candy, candy (the cute, fuzzy yellow kind), and rock-n-roll. This family movie review personally does not see anything that would make this movie questionable for younger children. It was absolutely adorable and this family movie review gives it a green light for any age group. It is cute, cute, cute, cute, cute, so hop on down to the local theater and see this one. Parents, you will definitely want to buy your kids jelly beans before this one, I guarantee.