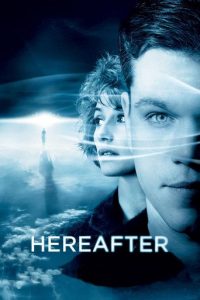 A supernatural thriller centered on three people -- a blue-collar American, a French journalist and a London school boy -- who are touched by death in different ways.

A supernatural thriller centered on three people -- a blue-collar American, a French journalist and a London school boy -- who are touched by death in different ways.

Death and how it affects people is the topic of this movie. Hereafter profiles the story of three people who are touched by death in some way. The first is a blue collar worker named George who has a special connection to the afterlife. The second is Marie, a French journalist who has a near-death experience. The third is Marcus, a London schoolboy who loses someone very close to him. The story is related to how these characters find their own personal truth and sort out their feeling about death.

This movie, Hereafter, crosses genres. It is a romance, science fiction/fantasy flick and a thriller all rolled into one. The content of this movie makes it one that is for young children. The theme of the movie makes it inappropriate for young children. It also contains a disturbing disaster scene and some strong language. I would have to agree with the MPAA on this one.

Parents, you may want to leave the kids with a baby sitter and be prepared for some serious contemplation after this one. This is a movie that deals with a subject that touches all of us in some way. It may be disturbing to some adults, as well as children.