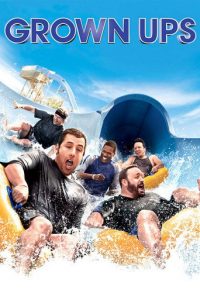 After their high school basketball coach passes away, five good friends and former teammates reunite for a Fourth of July holiday weekend.

After their high school basketball coach passes away, five good friends and former teammates reunite for a Fourth of July holiday weekend.

Collections: Dennis Dugan
Tagline: Boys will be boys. . . some longer than others.
Genres: Comedy

Runtime:  1 h 42 min
Five childhood basketball teammates meet 30 years later at a lake house to mourn the passing of their coach. While all grown up family men, they still remain young at heart and have a fun filled weekend.

Good sound track, solid cast with good chemistry, relevant message and a few good laughs should make for a pretty good movie. However, the positive factors are out weighted by predictability, too many fart jokes and just not quite making it work together. The humor in this movie is not for small children, parents beware.

The death of their heroic basketball coach brings 5 friends and their families together for his funeral. As they reconnect, the teammates realize they have forgotten the life lesson their coach had tried to teach them. The coach told them to live their lives meaningfully before the äóìfinaläó buzzer sounded. Lenny (Adam Sandler) decides to rent a log cabin and extend everyoneäó»s stay to bring back the joy they had lost. The 5 families relearn the value of lifeäó»s simpler pleasures.

The movie mixes sophomoric jokes (some not very funny) and funny situations (sometimes ridiculous) as they enjoy a few extra days together. The cast; including Kevin James, Chris Rock, David Spade, Rob Schneider, and Salma Hayek; has great chemistry and deliver lines with great skill however among the laughs there are misses. The Grown Upäó»s leaves the audience expecting and wanting more, even after a few guilty laughs.