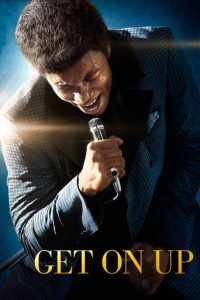 A chronicle of James Brown's rise from extreme poverty to become one of the most influential musicians in history.

A chronicle of James Brown's rise from extreme poverty to become one of the most influential musicians in history.

Get On Up is the real story of the legendary singer, James Brown. Chadwick Boseman plays the star and brings a note of authenticity to the role. James Brown rose from a life of hardship to become a legend of the entertainment world, but his road was not easy and this movie may be a bit too difficult for some audiences to take. This realistic portrayal may not be the best choice for a kid’s movie.

James Brown never left his past behind him. The movie intersperses scenes from his days of stardom with flashback scenes from his past. In one scene, James Brown is flying to Vietnam to support the African American troops. The propeller of the plane is hit. Brown is indignant and angry. His shows utter disrespect for the officer, showing his independent and rebellious side. There are several scenes where guns are pulled on people in tense scenes. As a teen, James Brown breaks into a car and steals a suit. There is a fist fight. This is an anger filled movie with its fair share of violence. This is not fictional violence, it is real and tells the story as it really was.

This movie is filled with racial prejudice and shows racial violence. This 1960s were known for violence and this movie does not fall short on depicting the times as they were. There are portrayals of sexual activity that goes beyond the casual allusion. A woman is seen naked, but her arms are used as an obstruction. There is smoking and drinking throughout the movie. In more than one scene a man slaps a woman. The language is strong throughout the movie. A group of African American teens is put into a boxing ring, blindfolded, with one hand tied behind their back. They are made to fight for the amusement of an upper class white audience.

Get One Up is about different times and different values. There is violence throughout the movie. The thing to remember is that it is real. Having seen James Brown live in concert, Chadwick Boseman did an excellent job of portraying the essence of the master on stage. It was interesting to see the man behind the music. Seeing the movie will be a real treat for James Brown fans, but is not recommended as the best kid’s movie for the whole family.

Guardians of the Galaxy