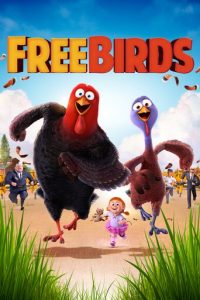 In this irreverent, hilarious, adventurous buddy comedy for audiences of all ages, directed by Jimmy Hayward (Horton Hears a Who!), two turkeys from opposite sides of the tracks must put aside their differences and team up to travel back in time to change the course of history - and get turkey off the holiday menu for good.

In this irreverent, hilarious, adventurous buddy comedy for audiences of all ages, directed by Jimmy Hayward (Horton Hears a Who!), two turkeys from opposite sides of the tracks must put aside their differences and team up to travel back in time to change the course of history - and get turkey off the holiday menu for good.

What is a time of celebration, good food, and time with the family is a horrible day in the life of a turkey. We all know this, but are you read for time traveling turkeys? You heard right, in this animated adventure two turkeys travel back in time to the first Thanksgiving on a mission to get turkeys off the holiday menu for good. This kids movie review thinks that based on the standard rating system, this movie is approved for the younger members of the family. It does contain some rude humor, but for the most part, is family friendly. However, some parents may disagree with the basic premise of the movie.

The two time traveling birds in this move are opposites personality wise. This creates the plot tension and adds an element of humor at times. The rude humor includes jokes about bodily functions and digestive tract gases. This humor occurs several times throughout the movie. There is also a scene when one turkey slaps another turkey. The situation is that the big brute turkey has thrown the smart, yet weaker turkey into a fort wall while trying to throw him over it to infiltrate the compound. When the larger turkey attempts to do it again, the weaker turkey firmly tells the larger turkey not to cross that line. He makes a declaration of his personal space. The stronger turkey then slaps the weaker turkey so hard that it spins the weaker turkey around. The weaker turkey then say, “Did you not see the line?” The stronger bird then slaps him back and forth repeatedly. It is not necessarily the slap itself the may be problematic for younger children, it is the context in which it occurred. This parental guide to kids movies thinks that parents need to be aware of this thematic element in the movie.

There are some scenes that might be too scary for those under five years old or school age. There are many chase scenes. In one scene, the turkeys are being chased by men with flamethrowers. In another, they are being chased with death rays. When the turkeys land back in time, they encounter musket fire and explosions. The human characters in the movie make light of the violence against the birds. The human characters often make comments about having the turkeys for dinner. For instance, one asks the other what they suggest. The other answers with common turkey side dishes. This movie does portray violence against turkeys.

This family movie may or may not agree with any particular set of family values. That is up for you to decide. This family move guide considers this movie to be fun for the entire family, but it might not be fun for the little ones. Every family must decide for themselves what it right for their family. This parental movie guide feels that it has a duty to inform before you buy the popcorn and soda pop.