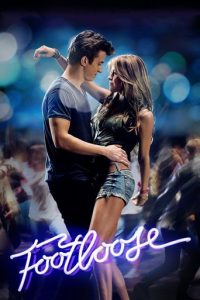 Ren MacCormack is transplanted from Boston to the small southern town of Bomont where loud music and dancing are prohibited. Not one to bow to the status quo, Ren challenges the ban, revitalizing the town and falling in love with the minister’s troubled daughter Ariel in the process.

Ren MacCormack is transplanted from Boston to the small southern town of Bomont where loud music and dancing are prohibited. Not one to bow to the status quo, Ren challenges the ban, revitalizing the town and falling in love with the minister’s troubled daughter Ariel in the process.

Parents, Footloose is back and the plot is the same as you remember. A boy moves to a conservative town where dancing and anything else fun is banned. The newcomer, played by Ren McCormack, decides to add a little excitement and shake things up a bit. This rebel spirit might seem familiar, as will the rest of the movie, for those of us who are old enough to remember the first rendition. The question that this family guide to the movies must ask is whether it is just a rehash of the first one, or whether they have any surprises in store.

The teens in this movie, like those in the first movie, break a few rules. The dancing in the movie is line dancing and is much less pop than the first movie. Once you get beyond the fact that this movie has only a few fundamental differences from the first Footloose, the next question that this Parental Guide to the movies must ask is whether parents what their teens to get any new ideas. Footloose is about the rebellious teen spirit that cannot be quenched by rules and laws.

Footloose poses several moral questions that must be answered by adults and by the teen audience for whom it was written. Consequently they are the same moral questions posed by the first movie. The first is, how bad is bad? Is it bad to disobey laws that make no sense and represent only one opinion? The next moral dilemma is whether the law is absolute. If a law is unjust, does that make it OK to disobey the law? Regardless of the answers to these questions, this parental guide to the movie sees an underlying theme of disrespect for authority and authority figures. But then again, this could be viewed as a normal part of teens growing up and gaining the independence that they will need as adults. Where to draw the line is the key theme of this movie.

The website has a section where your teens are encouraged to send in their own tapes of them dancing to the Footloose theme. So far, there are 250 head to head battles, filmed right below our noses. After viewing some of them, I would encourage many of them to choose another career for their future, unless you still want them to be living with you as an adult. In terms of a family guide to the movies rating, this movie is OK for teens, only it is rated a little higher than a straight PG. The reason for this is that the teens sneak into a bar with fake IDs. There is alcohol, skimpily dressed teens and other activities that are associated with bars in this scene. There is a lot of teen partying going on throughout the movie. From a teen perspective, it is boot slappinäó», backside slappinäó» fun all to the tune of a lively country song, the theme of which is about getting a fake ID.

This Footloose movie probably will not be as fun for adults as the first movie. Teens are the target market. It is about their quest for independence from the äóìeviläó adults in their life and the ridiculous rules that they impose. We all know that they think the only reason why we impose those rules is to make their life boring and miserable. As far as similarities to the first movie is concerned, there are too many to count, despite what the advertisers and the producers have to say. The theme song is the same, only there are no tractor races, it is a VW bug this time. The movie is still about dancing, the music, and the teen quest for independence. On a positive note, I do expect all adults in the movie to sing along in the theater the first time the theme song is played because we already know the words by heart.