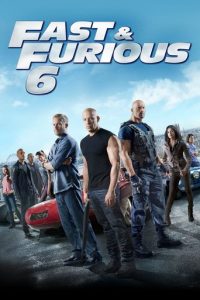 Hobbs has Dominic and Brian reassemble their crew to take down a team of mercenaries: Dominic unexpectedly gets convoluted also facing his presumed deceased girlfriend, Letty.

Hobbs has Dominic and Brian reassemble their crew to take down a team of mercenaries: Dominic unexpectedly gets convoluted also facing his presumed deceased girlfriend, Letty.

Fast and Furious 6 continues the life of Dom and Brian after they topped the empire of a famous international criminal in the last movie. The crew is living the high life, surrounded with lots of beautiful scantily clad women and fancy cars. Their last job brought them incredible wealth. The movie opens with the boys living the high life, including drinking and women. Several of the men are behaving this way with families back home, to whom they wish to return. Already we have an idea that this is a good movie to teach family values. Fast and Furious 6 is not a good family movie according to this Parental Guide to the movies.

The crew cannot return home to their loving wives and families because they are on the lam. The writers tried to justify their inappropriate behavior by the fact that they wanted to return to their families and resume their roles in their families. The question is how this justifies their behavior when away from their families. Apparently, the writers knew what sells and would do anything to work it into the story.

The boys need one more job to allow them to gain pardons and make their life complete. Go kill a bad guy and you past lawless deeds will be completely forgiven? The crew is called once again to help bring down a ring of highly skilled mercenary drivers who must be stopped. These criminals take them on a road chase that spans 12 countries before it is over. The crew must out drive these criminals and shut down the ring. If they do, their reward will be not be wealth, it will be the ability to return home with the pardons that they need to live their lives in peace. They can just return to their families and be the good fathers and husbands that they wanted to be while they were out behaving poorly in the beginning of the movie, when they couldn’t return home.

The film is filled with violence and action throughout. The movie is one long violent and action packed car chase with near misses, car flips, and dramatic crashes. The car chase is a form of warfare using vehicles. This movie takes the concept of a car chase to a whole new level. The action and violence throughout the movie are intense. There are many scantily clad women throughout the movie. There is one scene where a man and woman kiss in bed. The action in the bedroom is implied, but not directly shown. There is an occasional use of profanity of various sorts.

This movie misses the mark in terms of making a good Saturday afternoon with the family. The writers had to stretch to make certain that they included enough explicit material in the movie to make sure that it sells. They apparently still wanted that PG-13 rating, so they went to the line, but did not cross it. This well-crafted plot was designed to keep from limiting the audience of the movie. It is a big, fat fail in terms of being a movie for kids.