Home » Movie » Dumb and Dumber To

Dumb and Dumber To 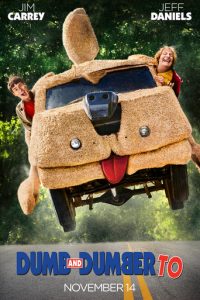 20 years after the dimwits set out on their first adventure, they head out in search of one of their long lost children in the hope of gaining a new kidney.

20 years after the dimwits set out on their first adventure, they head out in search of one of their long lost children in the hope of gaining a new kidney.

Dumb and Dumber To have the dimwitted duo back at it again. Twenty years after their first great adventure, they are in search of their long lost children in hopes of getting a new kidney. This movie has many silly antics as this duo is at it again. The movie is full of fun laughs, but this Parental Guide to the movies thinks that parents need to think twice before taking the entire crew.

In the first scene, one of the terrible twosome has been in a mental institution for 20 years in an apparent catatonic state over a girl. It turns out that he was faking it all this time. The other partner tries to remove the other one’s catheter by just pulling it out. Next, we meet the duo’s new cat named a crude name resembling the back end on cat’s anatomical parts. This movie has fireworks and flaming people jumping into swimming pools. There is smoking, car jumping, There is a scene that cannot be described in terms that can be uttered in public involving a little old lady and her “giblets.” Let’s just so far as to say that this scene alone disqualifies it as a kid’s movie. This movie truly goes where no man has gone before, nor would they ever wish to again in the future. Larry is in love once again with Harry’s daughter.

Dumb and Dumber To in no way resembles a movie that is appropriate for children under the age of 13. The script picks up where the first one left off, and many of the antics are predictable, especially for those that have seen the first movie. This movie is rude, crude, and plain silly. It is not the best choice for the younger members of the family by any stretch of the imagination. Harry and Larry have cooked up some crazy stunts in this one, but not all of their stunts are family friendly movie material.