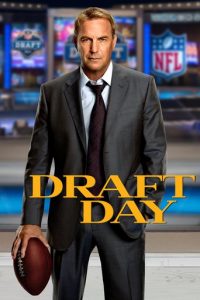 At the NFL Draft, general manager Sonny Weaver has the opportunity to rebuild his team when he trades for the number one pick. He must decide what he's willing to sacrifice on a life-changing day for a few hundred young men with NFL dreams.

At the NFL Draft, general manager Sonny Weaver has the opportunity to rebuild his team when he trades for the number one pick. He must decide what he's willing to sacrifice on a life-changing day for a few hundred young men with NFL dreams.

Kevin Costner is back on the big screen, only this time he is not Dancing with Wolves or running around in Sherwood Forest as Robin Hood. This time he is wresting the pig skin as the General Manger of the Cleveland Browns. He is desperate to acquire the number one draft pick for his team. This one is for dog pound, but is a good one for the pups? This family movie review has a score.

This adult drama does have some heated moments including brief bad words and some sexual references, but they are infrequent and do not make up a noticeable part of the content. To their credit, there were times when they could have inserted more harsh language, but chose to use a family friendlier word.

This is a great sports drama. Sonny Weaver's career and reputation are on the line. He must make this deal go down or all is lost. In this movie, Sonny is a good role model for showing that one can be strong, assertive, and firm without resorting to foul language and strong-arm tactics. The character of Sonny is a good role model. The central theme of the movie is about having confidence in yourself and taking risks, when you know that you are right. He follows his instincts, even when everyone else doubts him. It is a movie about sticking to your gut feelings, even when faced with adversity.

The one thing that everyone wants to know is if Sonny Weaver is based on a real character. After some research, the answer is no. Sonny Weaver is a fictional character who bears no resemblance to any manager that the Cleveland Browns has ever had. The movie is a great one for Browns fans, you might want to bring out your dog pound gear for this one, and you get to see them win. This movie has lots of cameos by NFL stars.

As far as a family guide to the movies is concerned, this one make the grade. It is an adult drama, so unless your little ones are really into football and the politics of the game, you might want to bring along some coloring books. The adults will enjoy this one, especially the football fans in the crowd. Loyal Browns fans will definitely be in for a treat.