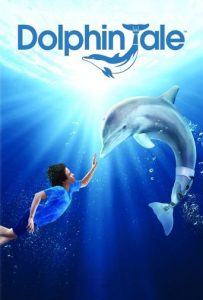 A story centered on the friendship between a boy and a dolphin whose tail was lost in a crab trap.

A story centered on the friendship between a boy and a dolphin whose tail was lost in a crab trap.

This family movie review considers Dolphin Tale to be a fantastic family movie. This movie is a must see, along with The Whale movie. The fabulous plot is about a boy who finds a beached dolphin whose tail has been badly damaged in a crab trap. He must save her and arranges to have her taken to a marine aquarium. The dolphinäó»s tail becomes infected and has to be removed. She builds a relationship with the boy and has hope.

The dolphin rallies and a daring doctor, played by Morgan Freeman, decides to attempt the impossible. He builds her a prosthetic tail. It is a story of hope and courage for both the finned and two-legged characters in the movie. The best part of the movie, according to this parental guide to the movies, is that the story is real. Even more remarkable, the real Winter (the dolphin) played in the movie! This is a must see for everyone.

The odds of survival for a dolphin that has lost their tail is slim to none, yet Winter not only survived, she thrived. This is a heartwarming tale of survival and hope. It speaks very deeply to those who must overcome seemingly overwhelming odds to heal and become whole again. It speaks to those who have lost a limb, veterans and anyone who must learn to cope with many changes. This is a story of hope that leaves you with a warm and fuzzy feeling and a feeling that you can do anything, it you have the right attitude. Winter is inspiring not only for the physically challenged, but for everyone.

This story has nothing but positive themes for adults and children of all ages. The MPAA rated it PG for mild thematic elements, but no information is available as to what those might be. Perhaps it is the injury to the dolphin. This parental guide to the movies could not find anything that would make it inappropriate for small children. If there were any disturbing scenes, they are lost in a sea of positive themes and inspired hope that permeates the entire movie. The movie has an underlying theme of acceptance of those who are different, even if they are a dolphin. The movie highlights the importance of every individual life on earth and their importance in the whole. Winter brought hope to everyone whom she touched. One cannot help but to be touched by her as well. This movie brings Winteräó»s message to a larger audience and if you watch the movie, you cannot help but to be touched in the same way as the characters.

The movie has an underlying theme about environmental destruction and the harm that we cause by our actions. We are ultimately responsible for the injuries to Winter. We hear messages about the negative effects of our individual actions on the environment, but they often do not hit home. This movie brings them home full force. We get to see the direct results of our actions on other highly intelligent creatures with whom we share the earth. This movie does a great job of bringing this lesson home to our children. Along with The Whale movie, I think Dolphin Tale is another äóìmust seeäó family movie for children of all ages.