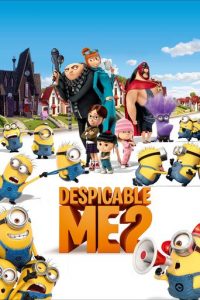 Gru is recruited by the Anti-Villain League to help deal with a powerful new super criminal.

Gru is recruited by the Anti-Villain League to help deal with a powerful new super criminal.

Gru is back for another adventure in Despicable Me 2. This time, he has been recruited by the Anti-Villain League to fight a new super-powerful super villain. This movie is an adventure in complete silliness. In this movie, Gru inherits three adopted daughters that make his life difficult. The plot is complicated and this movie is a laugh a minute, but is this movie appropriate for everyone? This family movie review has the scoop for parents.

Let’s see if we can untangle the plot just a little. First, there is the super villain that Gru has to battle. Next, there are the three adopted daughters who have been placed in his care. He is aided by a team of small, amorphous yellow creatures in suspenders, who can’t seem to get anything right. Slapstick comedy and rude humor abound in the world of this super villain against super villain world. It is so difficult for a super villain to find his balance in a world like this.

The MPAA considered this movie to be a PG, rather than G due to some rude humor and actions scenes. The movie is geared towards school-aged children below the age of 10. The characters do hit and punch each other slapstick style in some scenes. If you happen to be a family that has siblings that are mixed school age and younger ones, it is probably nothing the younger ones have not seen before. The scary scenes are not that scary by most standards.

The movie contains many conversations that will be familiar to most families. For instance, the girl is texting a person with a gender ambiguous name and the father asks if it is a girl or a boy. The super villain is not a nice guy. Rude humor is on the level laughing about the Anti Villain League employee’s name, Mr. Rambottom. There are several toilet humor jokes. There are a number of weapons like freeze rays, flamethrowers and a spiked mace.

This movie shows the tender and gentle side of the bad guy. In terms of the moral high ground, one must keep in mind that the super villain is the hero of the movie. However, the premise is that Gru has turned over a new leaf and is now the good guy. However, he just cannot help himself but to let his evil villain side shows through sometimes. This movie is fun for the whole family, except perhaps for children 3 and under. However, it does not contain any content that is not found in the average elementary school classroom. This Parental Guide to the movies recommends Despicable Me 2 for an afternoon of complete silliness for the whole family.