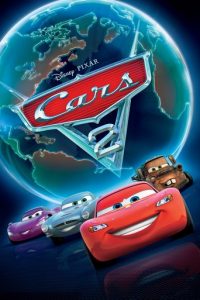 Star race car Lightning McQueen and his pal Mater head overseas to compete in the World Grand Prix race. But the road to the championship becomes rocky as Mater gets caught up in an intriguing adventure of his own: international espionage.

Star race car Lightning McQueen and his pal Mater head overseas to compete in the World Grand Prix race. But the road to the championship becomes rocky as Mater gets caught up in an intriguing adventure of his own: international espionage.

Vrooom! Vrooooomm! Cars is back! In this version, Lightning McQueen teams up with his best friend, Mater, for more racing adventures. This time around, they are in a race to compete with some of the worldäó»s fastest cars. This family movie review thinks that if you liked the first one, this one is more of the same racing adventure fun.

Three races, two continents, international espionage, and more thrills than will fit in your trunk are what this movie has to offer. The theme of this movie is about friendships and sticking together through good times and bad, even when the odds are against you. Twisting winding roads, bad guys and danger fill this adventure to the tailpipes. This movie has several explosions, but no cars are violently harmed in the scenes. The suggestion of violence is made, but it is not directly shown. I would consider this a movie for all ages.

In terms of appropriateness for children, this move is similar to other Disney movies that have non-human characters. It is a cute movie, set in the style of an old James Bond movie. The characters deliver many funny lines. For instance, the spy car introduces himself as äóìBritish Intelligenceäó in a very proper British accent. Mater, the rusted tow truck answers in a very country accent, äóìAverage Intelligence.äó This is an example of the types of humor found throughout the movie.

The creators of the movie did not miss the chance to make socially relevant points, such as the destruction of the environment by the oil companies, and making fun of airport security. Social stereotypes abound throughout the movie, just to be forewarned. The plot for cars relies more on the interactions between the characters than on the storyline, much like the first cars.

Just be prepared, you can be certain that a line of toys, blankets, clothing, and all of the wonderful items that still fill your house from the first movie are being rolled off of assembly lines as we speak. Cars 2 can be expected to be a mass marketing blitz, that will hit at your kidsäó» hearts and your wallets, so just be prepared.

Cars 2 will be a fun movie to go see with children of any age. It is geared towards the younger age group, so your older children who saw the first Cars might not be as interested as their younger siblings. The cars are absolutely cute, and sure to be collectible. This movie has a lot of entertainment value and would make a wonderful Saturday Matinee outing.

Judy Moody and the Not Bummer Summer