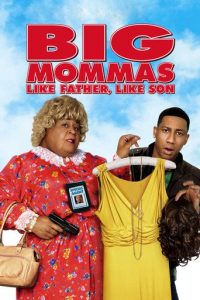 FBI agent Malcolm Turner and his 17-year-old son, Trent, go undercover at an all-girls performing arts school after Trent witnesses a murder. Posing as Big Momma and Charmaine, they must find the murderer before he finds them.

FBI agent Malcolm Turner and his 17-year-old son, Trent, go undercover at an all-girls performing arts school after Trent witnesses a murder. Posing as Big Momma and Charmaine, they must find the murderer before he finds them.

FBI agent, Malcolm Turner finds himself in a situation where he must hide his own son to keep him safe. Seventeen year old, Trent, witnesses a murder and the killers saw him. Now they are out to get him too, so that there are no witnesses. Malcolm must be creative and put his son in a place where no one will find him. So what is a father to do?

The answer, dress your son in drag and put him in an all girls performing arts school. Malcolm poses as Big Momma and accompanies Trent, now known as Charmaine, to all the girls at the school of arts. What happens when a seventeen-year-old boy suddenly finds himself surrounded by nothing but women? Hilarious comedy, thatäó»s what happens, as both father and son try to fit into world filled with women. Can they pull this off and make it look seamless, welläó_ not exactly.

In this movie, plus sizes are beautiful, but the movie also makes the point that plus sized women are only attractive to plus sized men. This feeds a stereotype that might be harmful and may not be a positive attitude to teach children. However, this family movie review feels that this is not an issue, because there are many other reasons not to take your children to see this movie.

We will give this movie an A+ for creativity, but it has to get an F for family friendliness. The movie was rated PG-13 for some sexual humor and brief violence. OK, we will give them äóìbriefäó violence. However, to say that this movie contains some sexual humor would be the understatement of the year. It would be difficult to count the number of instances of sexual humor. This movie definitely provides a colorful anatomy lesson for everyone. It gives entirely new meaning to the ballet the äóìNutcracker.äó Colorful references to body parts are a constant throughout the movie. One scene in particular happens when Big Momma is asked to pose for an art class that is presently doing a study of nudes. I donäó»t think I need to give any more examples than these for you to get the picture.

This movie looks hysterical for adults, but this Parental Guide family movie review considers it a definite babysitter night. Whether you take your young teens or preteens to see the movie depends on how much exposure they have had to this type of humor. In my own judgment, I would caution taking any child under 13 to see this movie. It is similar to Mrs. Doubtfire in content and its use of men in drag. However, I think this movie took the subject quite a bit farther than Mrs. Doubtfire. Even the adults might learn some new terminology that they did not know before the movie. I know I did. So take this family movie review word of caution when deciding whether to go see this movie or not.

I Am Number Four