Amazon.com
$14.99
See it
Last Amazon price update was: October 1, 2019 7:57 am
× Product prices and availability are accurate as of the date/time indicated and are subject to change. Any price and availability information displayed on Amazon.com (Amazon.in, Amazon.co.uk, Amazon.de, etc) at the time of purchase will apply to the purchase of this product.
Share8
Tweet
Pin
8 Shares 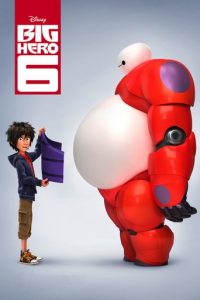 The special bond that develops between plus-sized inflatable robot Baymax, and prodigy Hiro Hamada, who team up with a group of friends to form a band of high-tech heroes.

The special bond that develops between plus-sized inflatable robot Baymax, and prodigy Hiro Hamada, who team up with a group of friends to form a band of high-tech heroes.

It’s a tumultuous time for the Disney animation department. The studio’s acquisition of Pixar has certainly offered plenty of new talent and technology to play with, and the newly minted partnerships with Marvel and LucasArts will surely keep them supplied with fresh intellectual property for years to come. Disney could be embarking on another renaissance here, using modern technology and classic storytelling to push animation to places it’s never gone before. Or it could make movies like “Big Hero 6”.

To be clear, “Big Hero 6” isn’t a bad movie by any stretch of the imagination. It’s bright, fun, somber, and moving, coupling wide-eyed childish wonder with cutting edge CGI to create a fantastic spectacle. It’s just that that’s all it is: a big, silly retread of tropes Disney already played with, except now with a new coat of varnish.

The story follows the appropriately named Hiro, a teenage robotics genius voiced by Ryan Potter. Hiro is inspired to put his intellect to use for the greater good by his brother, Tadashi (Daniel Henney), and he invents a swarm of “microbots” that can work together to build or destroy just about anything. Tadashi is killed in a suspicious accident, so Hiro teams up with Baymax, a balloon-clad medical robot of Tadashi’s invention played by Scott Adsit, to solve the mystery of his brother’s death and maybe become heroes in the process.

Hiro’s story arc just oozes “The Lion King” iconography. The boy is already an orphan at the film’s start, but the loss of Tadashi eagerly cuts straight to the emotional jugular, as Mufasa’s iconic death scene did so many years ago. The film seems almost excited to make us feel sad, and while it does so with great skill and resonance, you can feel the tears coming a mile away. Some wacky college student allies who pop in later offer a very “Hakuna Matata” vibe to the later proceedings, which really doesn’t help the film distinguish itself.

But this is a Disney film after all, and that means, if nothing else, you’ll get some chuckles amidst all the tears. This is where Baymax shines. The rubbery robot is a slapstick genius, evoking deep belly laughs as he awkwardly chases a soccer ball or fails to understand how to perform a fist bump. The aforementioned gaggle of college buddies offers a few similar guffaws, though the group rarely rises above one-note sidekick status.

And this should come as no shock, but the animation is spectacular. “Big Hero 6” is set in the city of “San Fransokyo”, a glorious, futuristic mashup of Japanese and American cultures that’s somehow both familiar and unique. The animation team has not cut any corners on this film’s design. Everything is rendered to the most conspicuous detail, from the freckles on Hiro’s nose to the black cloud of microbots that chases him from set piece to set piece. Later in the film a few reality-warping plot devices come into play which are sure to bring an audible “whoa” from even the most jaded of film goers.

But that’s all dressing on the top. At its core, “Big Hero 6” feels extremely familiar, and maybe a bit too eager to tick off the Disney checklist. The film revels in the joys of discovery but can’t quite seem to extend the same pioneer spirit into the script. That’s unfortunate, but it’s not a deal breaker.

“Big Hero 6” might not redefine the CGI cartoon, but it’s fun, funny and has plenty of heart, even if it’s a story we’ve seen once or twice before.

In a unique take on the ordinary citizen who turns into a superhero, Big Hero 6 ads a different twist to an old plot. When trouble strikes, Hiro Hamada becomes Baymax. Who is Baymax, you might ask? He is a giant supersized inflatable robot. Parental Guide to the movies bets that you never saw that one coming. In his life as a supersized inflatable robot, Baymax, he must bring together a bunch of tech saavy kids to fight an evil villain. Let's take a closer look at Baymax and friends. When an unfortunate event befalls San Fransokyo, Hiro Hamada transforms into Baymax to save the day. He is accompanied by Go Go Tamago, an adrenaline junkie with a need for thrills and excitement. He is also accompanied by a spicy little fellow, neatnik Wasabi, whiz honey lemon, and fanboy Fred. Together they strike out to save the day. This flock of inflatable fun has a few elements that may be questionable to some parents. There is a brief mention of puberty. There is some name calling, jerk, stupid, brat and other colorful examples. Other than that, there is the some action and scenes involving danger that may be too much for the younger members of the audience. This family is about friendship, family, and sticking together through thick and thin. Baymax is benevolent and kind. He is much like a big, fluffy marshmallow with a huge heart. Baymax has a tough time transforming into a tough superhero. He is just too lovable. This is a heartwarming story about a big guy with a big heart. There is little reason for concern from a parental standpoint on this one. This family movie review considers this one to be a fluffy fun filled frolic for any Saturday afternoon with the family. Don't be surprised if your kids suddenly have a craving for marshmallows. Big Hero 6 is a supersized trip that will be sure to please.

Alexander and the Terrible, Horrible, No Good, Very Bad Day