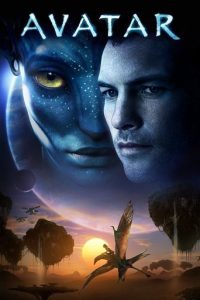 In the 22nd century, a paraplegic Marine is dispatched to the moon Pandora on a unique mission, but becomes torn between following orders and protecting an alien civilization.

In the 22nd century, a paraplegic Marine is dispatched to the moon Pandora on a unique mission, but becomes torn between following orders and protecting an alien civilization.

Runtime:  2 h 42 min
Avatar is the brain child of director James Cameron, who has directed such other films as, Terminator, Aliens, and Titanic. It explores the world of Pandora as seen through the eyes of a paraplegic marine, Jake Sully. Jake is given the command of an avatar, which is the artificially formed body of one of the native intelligent life forms, the Naäó»vi. The film follows his metamorphosis from a mercenary sent to infiltrate the aliens to a fierce defender of their way of life.

Cameron chooses to aim for a sense of realism in his film rather than to shoot over the moon into the fantasy realm. In this way he differentiates himself from some other science fiction movies, such as the Star Wars series. However, in aiming for realism he äóìborrowsäó a lot of his film from other work. His militia flies around in aircraft straight out of Bungieäó»s Halo series. The soldiers fight in mechanical bodysuits that are taken from the Matrix movies. The alien ecology borrows from a variety of backgrounds, with samplings from Pitch Black, Dungeons and Dragons lore,and also the Jurassic era of history. Many of the aliens are merely extrapolations of dinosaurs, with extra legs for good measure.

Cameron does do a few things to take his borrowed ideas and turn them into something undisputedly his own. Primary among these is that he takes the interconnectedness of life and turns it from figurative hyperbole into a science fiction reality. Many other movies have attempted to point towards the inherent connections we share with the world around us. Cameron takes it a step further in this movie, giving the flora of Pandora a literal neural network, like a planet sized brain. The Naäó»vi sport an extended ponytail that serves as a sort of living USB. They can plug in and connect with the plants, and even other animals to directly interact with them on a mind-to-mind level.

Avatar has generated much hype over its redefinition of special effects. From a strictly cinematographic and special effects stance, it is a leap forward. As a story, and as a comprehensive work of art, it is less of a surefire hit. The story is essentially a retread of every nature moralist tale from Dances with Wolves to Fern Gully. It fails to engender a suspension of disbelief at several key plot points, which hurts its odds at theatrical awards other than those given for special effects, and possibly soundtrack. As a commercial product, it is a great success. In less than a month since release, it has already vaulted into position as the 2nd highest grossing movie of all time. Itäó»s worthy of note that the top grossing film, Titanic, was also directed by Cameron.

Avatar is rated PG-13 for violence, language, sensuality, and some smoking. It is a pedestrian PG-13 movie, not a boundary pushing film like Titanic was. The sensuality in the movie involves humanoid 9 foot tall blue aliens, which most would deem a mitigating factor. The violence is not interpersonal for the most part, but rather between vehicles and animals, or in one scene between an aerial fleet and a tree. (You read that correctly, that is not a joke) The tree really doesnäó»t do much fighting; it more or less just catches fire and falls down, although it does quite a good job of making a dramatic performance out of the job.