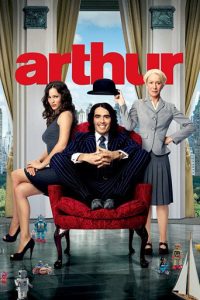 A drunken playboy stands to lose a wealthy inheritance when he falls for a woman, his family doesn't like.

A drunken playboy stands to lose a wealthy inheritance when he falls for a woman, his family doesn't like.

Arthur is a spoiled, bratty playboy and heir to a millionaire. He has always been told what to do and where to go by his controlling nanny. The character of Arthur is dysfunctional to say the least. Having never had to lift a finger, even to make a simple cup of tea, Arthur is unprepared to make his own decisions in the world, let alone control a million dollar estate. His family wants him to marry a girl whom he does not like. He falls for the girl of his dreams, but his family forbids it because she is of the wrong background. His struggle is to get the girl of his dreams, but he does not get it and goes about it all wrong. He finds that money cannot buy love.

Arthur is about childish fun. It is about money versus true love. It is rated a PG-13 by the MPAA for alcohol use, sexual content, language and drug references. The MPAA ratings tended to downplay these elements in the movie, making it appropriate for those over the age of 13. However, as a parent, this family movie review would consider this one for mid-to older teens. These themes construe a large part of the movie and play a key role in the plot.

Arthur is a playboy and alcoholic whose main hobbies are drinking, women and having fun. Arthuräó»s intended bride gives him a French kiss and Arthur makes a comment that is, in this family guide to the movieäó»s opinion, inappropriate for young children. There are many women in skimpy lingerie in compromising positions throughout the movie. It is difficult to see how this movie could be remotely considered appropriate for younger teens. If you take them, they could be in for an educational experience, not limited to the various anatomy lessons that are splattered throughout the movie.

For adults, this movie could be cute, if this is your brand of comedy, for children, this movie portrays poor role models and inappropriate behaviors as being the right thing to do. In the end, despite his juvenile behavior, he still gets his inheritance and becomes a millionaire. The theme of the movie sends the message that life is fun, games, and irresponsible behavior is rewarded in the end. This parental guide to the movies would have to put an age limit on this movie as inappropriate for anyone not yet in High School, absolutely not for those under the age of 13 and questionable for young teens.