Skip to toolbar
Home » Movie » And So It Goes

And So It Goes 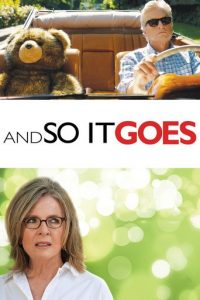 A self-centered realtor enlists the help of his neighbor when he's suddenly left in charge of the granddaughter he never knew existed until his estranged son drops her off at his home.

A self-centered realtor enlists the help of his neighbor when he's suddenly left in charge of the granddaughter he never knew existed until his estranged son drops her off at his home.

And So It Goes is an adult movie about an adult issue. It tells the story from the adult point of view. This movie is about a realtor who is rather stuck on himself and very selfish. He suddenly finds himself with more than he can handle when his estranged son drops the granddaughter he never knew existed off on at his home. He has to call in the troops and his next door neighbor is more than willing to help. This parental guide to the movies has the story on whether this one is really for the kids, or if it is actually something only a grandparent could love.

The move was rated a PG-13 for some sexual content and drug related elements. The main character comments that his granddaughter is Guatemalan and that his son had sex with the maid once. He says this right in front of the little girl, who is about 7 or 8. He talks to the little girl about how she is going to make someone a great wife someday. He says it sarcastically. The main character tells the grandmother that he has someone else as a friend so she can die now. The movie is filled with these types of sarcastic comments presented as humor. He speaks openly that the last time he had sex and tore his ACL. There is smoking and drinking in a nightclub as well.

But wait, there’s more. A pregnant women begins having a baby on the couch with the little girl in attendance. The main character points to the woman on the couch and says to the little girl, “See, this is what happens when you have sex.” The baby is born and comes out wet and screaming. The main character holds the baby and makes several off color comments. There is plenty of senior citizen flirtation between the man and his neighbor. The neighbor and the little girl have a talk about the birds and the bees.

The main character of the movie is rude and obnoxious, not necessarily what one would call grandfatherly material. He cares much more about his money and property than his people.

He takes advantage of people, but eventually, this little girl opens his heart, at least just a little. This kid’s movie review thinks that this movie is life, raw and uncut, maybe just a little too raw and uncut for audiences under 13. This movie has more to offer for the 65 and older crowd. It does not have much to offer younger members of the audience in terms of interest.