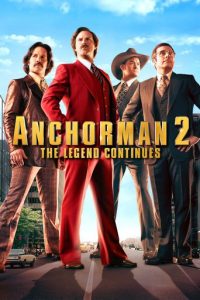 Anchorman 2: The Legend Continues with some not so family friendly antics. The 1970s brought a world of wealth to the Channel 4 newscast, but now times have changed and they are not at the bottom of the ratings. They are stuck reliving their glory days, while cast into the pits until the advent of a 24-hour news channel. The group is given a second chance to regain their fame and their fortunes. However, this comedy many not be the best family fun and this Parental Guide to the movies will tell you why.

This movie has nonstop sexually oriented remarks and jokes that will have every parent in the audience in shock. These Anchormen are right out of the 1970s and all of the culture that went with it. There is extremely derogatory commentary about certain ethnic groups and anyone who is not mainstream. The men are womanizers and view women as objects. They still wear wild 1970s wide ties and they still have the same social values. Times have changed and these values are outdated. It would be difficult to find a group that did not find themselves demeaned and offended at some point in this movie. This content did not add anything to the laugh factor of the movie. This family movie review thinks that these types of slurs detracted from the movie. There was nothing funny about its offensive content.

This kid’s movie review is not finished. In one scene, a child is seen wearing adult bedroom attire that was meant for his mother. There is one bedroom scene. They do not tell all, but they do not leave much to the imagination either. That only covers the inappropriate sexual content. There are also lots of fight scenes and a building explodes. It is presented in a comedic fashion. One man is kicked and punched in an extremely sensitive area and the scene is portrayed extremely dramatically. One character tries to hang himself but fails. The sexually oriented and foul language is too abundant to count. Characters smoke and drink throughout.

The characters in this movie may have been hip in the 1970s, but their brand of comedy does not stand the test of time. The kind of comedy in this move went out with disco, wide ties, and big hair. Some may find it humorous, but parents need to be warned about this one long before the ticket line. It may not have met the criteria for being rated an R, but that still does not make this move appropriate for all audiences.