Skip to toolbar
Home » Movie » A Strange Brand of Happy

A Strange Brand of Happy 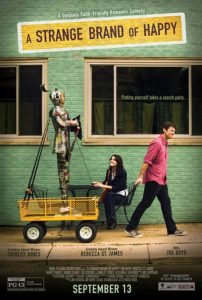 An aimless bachelor loses his job and finds himself chasing the same girl (his new life coach) that his manipulative ex-boss is after as well. The boys are spurred on by a rag tag group of retirees in need of some action.

An aimless bachelor loses his job and finds himself chasing the same girl (his new life coach) that his manipulative ex-boss is after as well. The boys are spurred on by a rag tag group of retirees in need of some action.

Two people, one girl, and a spiritual journey are the makings of A Strange Brand of Happy. This adult romance has a simple plot. Another man appears on the scene and threatens to steal David’s girl right out from under him. This is an adult romantic comedy and does contain some suggested adult activity. To say that it is complicated would be an understatement, but is it a good kid’s movie? That is up to you to decide. Let this family movie review tell you more.

The best place to begin this plot is in the beginning. When David loses his job, his roommate pushes him to hire a life coach. Joyce is a beautiful woman and David finds himself interested in her more than her advice. At the advice of Joyce, David joins a group that volunteers at a retirement home. David soon discovers that his ex-boss is also in the group and that he is interested in Joyce also. The battle begins between these two men for Joyce, the ultimate prize. This adult romance may be too much for the young ones who do not understand the complexities of adult relationships.

We have not even begun to describe complex in this movie. The love triangle is complicated, but when David begins to find himself, it becomes even more complicated. Now add some experienced senior citizens who are out for a little excitement and you have the right mix for some romantic fun. One of the older gentlemen goads David to fight for Joyce. David decides to go to an open mic night with Joyce where people ponder spiritual questions about God. David is more moved than he expects. This Parental Guide to the movies will stop here and let you see the rest for yourself.

This movie promotes itself as being a faith-friendly film. There are some references to adult situations such as a reference to an “all night pajama party.” It is obvious that the ultimate goal of the two men involves fun and frolic with the woman in the movie. She is treated as the ultimate prize and the object of desire. Emphasis is placed on her attractiveness, rather than her personality as the ultimate prize. Some may feel that this movie objectifies women. This thematic material and the adult roles portrayed in the movie might not be the most appropriate for those under the age of 13. Of course, this depends on individual preferences and parenting styles. This movie was not intended to be a family movie, but it might be a good getaway without the kids. This one has a high snuggle factor.

Battle of the Year